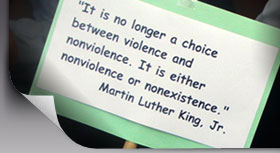 A Call for Nonviolence

In 2003, the President of the Dubuque Sisters of the Presentation, in conjunction with 10 other congregational leaders of women religious in the Dubuque and the surrounding area, made a public statement, A Call for Nonviolence, decrying the invasion of Iraq. War dehumanizes and diminishes all of the human community and devastates Earth. The ongoing war in Iraq is taking an immense toll on human life, not only of young men and women in the military but also the lives of innocent civilians of all ages. This war has caused untold damage to the land and to the infrastructures of Iraq. We also have grave concerns about the alienation and diminishment of the moral and political leadership of the United States in the world community.