The life of Nano Nagle and its fruits attest to the positive impact a single life can make. 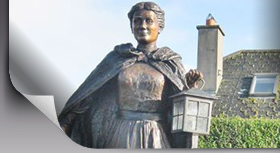 On October 31, 2013, Nano Nagle was declared Venerable by Pope Francis. This announcement brings the Canonisation of Nano Nagle one step closer as it is the second of four stages in the Canonization Process. Nano Nagle’s Cause for Canonization was officially initiated at the bi-centenary of her death in 1984. In 2004, the Central Leadership Team set up a Nano Nagle Commission Office, to help in promoting Nano as a woman of faith and courage, in the hope that she may soon be declared Venerable. The Commission comprises three Presentation Sisters, one from each Irish Province. The Commission has worked to make Nano better known and to promote the Cause of her Canonization. To forward the Cause of Nano, it is imperative that people cultivate devotion to her, and pray to her for favors.

This story is one of our most important in the line of miracles for the Canonization of Nano.  For those of you who are not aware of the details of Anne’s story, the following account will be of interest to you.

On the morning of 9th December 1990, Anne Wallace, a physiotherapy student in St. Vincent’s Hospital, Merrion, Dublin, was cycling to class there, when she was involved in a collision with a car.  A doctor, driving to St. Vincents, came on the scene and stopped to administer medical attention.  Anne was very badly injured.  An ambulance came and took her to the Accident and Emergency of the same hospital.  Immediate attention was given.  Anne was unconscious.  She had multiple very serious injuries, external and internal.  She was admitted to the hospital and brought to surgery immediately.  In the meantime her parents, living in Dooradoyle, Limerick, were informed of the accident, and travelled to Dublin in the most dreadful weather conditions. They prayed all the way to Nano, to bring them safely to the hospital. The prognosis was not good.  Many friends of Nano were alerted to pray continually for a miracle.

The medical teams continued to work around the clock administering care and attention.  Anne’s parents kept vigil.  Eventually the doctors told the family there was nothing more they could do.  Anne’s father had grown up with a great love of Nano and consequently a deep - deep devotion to her.  Anne was in and out of consciousness, had further surgery and hung by a thread to life.  Her father always carried the relic of Nano in his pocket, and decided to place it in Anne’s hand while he kept vigil beside her bed.  He entered deep prayer, and sometime in that prayer felt a tip on his shoulder.  No one, only Anne was there.  She was semiconscious. She suddenly spoke and said:  “I am allergic to penicillin”.  That was the changing force.  The medics were informed and they changed her treatment.  Anne began to improve.  That “penicillin idea” came from nowhere, only from Nano, as there had been no talk about it at all.  Anne made a full recovery.

Today Anne is married and has two children.  This in itself is a miracle as she had so many internal injuries.  This miracle in its full details is with the Postulator and also in Rome. Please continue to pray to Nano for any favors, and let us know if you receive any favors, no matter how small. Please send to: