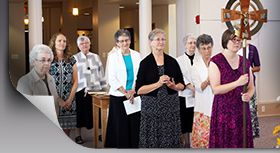 Nestled in the foothills of the Andes Mountains in southern Bolivia, the pueblo of Entre Ríos bustles with the flurry of activity generated by its businesses, schools and families. There was a pause in these daily activities of life as members of San Luis Parish gathered on September 8, 2011, to hear one of their own make a life-long commitment. Sister Mery Cari Paz, in a ceremony framed in great joy and celebration, professed her final vows as a Sister of the Presentation of the Blessed Virgin Mary.

Starting with spontaneous applause that greeted the 10 Presentation sisters in the entrance procession and continuing with the enthusiastic music provided by the youth of the parish, the hearts of those present for the Eucharistic liturgy clearly felt the profound solemnity of the moment. In a voice that was strong and clear, Sister Mery proclaimed her vows: “...Prometo a Dios obediencia, castidad y pobreza por toda mi vida.” (I promise to God, obedience, chastity and poverty for the rest of my life). Bishop Francisco Javier del Rio, Diocese of Tarija, then blessed Mery’s ring, a symbol of her love for and fidelity to God. The congregation declared their affirmation of Sister Mery’s promises by punctuating the setting with long lasting applause. The enthusiasm of those present seemed to mirror the sentiment of the Biblical psalmist: “The hillsides are wrapped in joy.” Psalm 65, 12

The celebration then flowed into the patio of the parish center as family and friends were welcomed to a reception under the evening stars. Sister Mery’s father, Don Felix Cari Miranda and her sisters, Nilda and Lola and brother, Osman, observed the great love and respect that parish members have for Sister Mery. They could not miss the unbridled enthusiasm of her First Communion students as they floated in an admiring circle around her wanting to be close to her and sensing her joy.

As a seven year old, Mery was attracted to the gentle spirit of the Presentation sisters who she came to know over the years. “I heard Sister Julianne teaching the people songs of praise to God. There was something special about her.” A spark of joy seemed to be ignited in Mery’s heart years later. Sister Mery completed her education and Licenciatura en Farmacia y Bioquímica at San Francisco Xavier de Chuquisaca and was employed as a pharmacist. It was in 2002, that she began working as a pharmacist with Sister Suzanne Takes in Entre Ríos. As Sister Mery identified more deeply with the spirit and mission of the Presentation community, she participated in the formative stages of affiliation and candidacy as an introduction to religious life. She was formally received into the community on January 11, 2006, and began her two-year novitiate program at the Inter-Congregational Formation Program in Cochabamba, Bolivia. Sister Julianne Brockamp accompanied Sister Mery as her formation director during that time. She made first vows on June 8, 2008, in the presence of her Presentation sisters in Dubuque as she integrated her Bolivian heritage with the traditions of her Iowa-based community. She was then engaged in ministry in San Luis Parish working with the youth. She is also now involved with the parish's First Communion preparation program and Bible study for children and adults.

During her vow ceremony, Sister Mery asked for the continued prayers and support of her family, the Presentation sisters and the members of San Luis Parish. She expressed her gratitude for all who have accompanied her on this journey through religious life.

In the future, her spirit of ministry will draw Sister Mery into the hillsides of Entre Ríos to bring the love of Jesus and to be blessed by all she meets. A line from her vow ceremony music may well reflect her focus on the mission of Jesus: “Llevame donde los pueblos necesiten tus palabras...donde necesiten mis ganas de vivir.” (Bring me to the places where the people need your Word...where they need my desire for life).