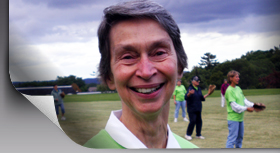 A Woman of Prayer and Ministry

Karen Kathryn Takes, oldest daughter of Leo and Rozena Smith Takes, known in religion as Sister Mary Ruth Ann, grew up on a farm near Monti, Iowa. With two older brothers, Carroll and Jim, strong, loyal, loving and – always the “big brothers,” and two precious younger sisters, Patty and Diane, Karen occupied the “center” of the sibling line-up – and has remained “central” in the hearts of her immediate and extended family.

Rooted in all things rural, Sister Ruth Ann maintained a life-long love of nature. She chose the time of her home visit based on haying season, so she could help. Her preference was always outdoor work and a favorite exercise was walking/communing with God’s creation.

Sister Ruth Ann, salutatorian of her high school graduating class, became a music teacher, having earned a bachelor’s degree in music/theology at Clarke College, Dubuque, a master’s degree in music at the University of Milwaukee, Wisconsin, as well as a master’s from Loyola University in Chicago with an emphasis in liturgy. She taught music in six different Presentation schools in Iowa and South Dakota; her first mission in the shadow of Mother Vincent at Key West. Additional ministries included serving as a pastoral minister in two parishes, Fonda and Varina, Iowa, and as a pastoral administrator at St. Clara Parish in Clara City, Minnesota. As Mount Loretto house coordinator she directed activities at the motherhouse for seven years. Her most recent ministry was that of care associate at St. Therese Care Center in New Hope, Minnesota, where she walked the journey with many hospice residents to their eternal home. May she now rest from her labors for her good works accompany her into the arms of God.

Like Nano Nagle, Presentation foundress, Sister Ruth Ann offered a passion for service, a heart full of care and a pastoral presence. Spirit-filled, energetic, generous, loyal, and industrious, Sister possessed a “Nano-heart,” and ministered accordingly. A deep, family-rooted faith, fostered in early morning prayer each day, marked the centrality of God in her life. Like a lantern she warmed and welcomed those who shared life with her.

For her friends she offered an anchor, supported by her balanced and faithful ways. For her family she was the “glue” that kept everyone humming and celebrating. After all, everything was usually on hold “until Ruth Ann got there.”

Though life isn’t perfect for anyone, Sister Ruth Ann maintained a song in her heart, and a spring in her step. She lived simply and gracefully – like a dance! With a spirit of gratitude for all, she made a difference wherever she went. Her joy was contagious and her happiness a legacy to her family and friends.

Sister Matthew Cunningham offered her assessment from the vantage point of another music teacher. Holding high her index finger and speaking with corresponding authority, Sister Matthew declared that Sister Ruth Ann never said an unkind word about any one. Isn’t that the highest of compliments?

Family gatherings for both the Smith and Takes families usually meant a pot-luck dinner, followed by clearing the table and an afternoon and evening of card playing. For big and not-very-big occasions, they played cards, or when Sister came home, or they came to visit, they played cards. Or for no reason at all, they played cards. What is it about card-playing families? They are never without entertainment; they are creative enough to make their own fun; they can pick up where they left off, and then have another round or play one more hand.

As a youngster Karen convinced her sister, Patty, that they should both put their pillows on the floor at night so they would have good posture. It worked. Additional discipline included practicing the piano wearing gloves because the piano was in the parlor which wasn’t heated in the wintertime.

When her sister Patty got married at St. Patrick Church in Monti, the bridal couple and Sister Ruth Ann climbed into the Volkswagon, drove to Independence for a private dinner party, and then went to Cedar Rapids to visit a hospitalized grandmother. Seeing Patty in the finery of her bridal attire, Mark in his tuxedo, and Sister Ruth Ann in full habit offered, as you can imagine, a number of head-turning opportunities at the hospital.

When Sister Ruth Ann was on mission she sang and danced and played a variety of musical instruments. She sang with the local chorales and played in a hand bell choir. When the Dubuque Presentations made a pilgrimage to Nano’s homeland, Sister danced the Irish jig in its native setting. She joined the select dance group for the Presentation Convergence in St. Paul, 2006. She also enjoyed horseback riding, swimming, aerobics and line dancing.

Sister Ruth Ann visited her sister, Patty, and brother-in-law, Mark, when they were teaching in Egypt, and took weekend mini-retreats at the home of her sister, Diane. She played cards with her family when they gathered. When the card game ended and nearly everyone went home, the host family and Sister Ruth Ann watched a movie and ate popcorn. She always enjoyed the simple and the ordinary with her family and community.

When the grandchildren came to visit, “Ruthie” hid so they could find her. She was known once to have jumped the creek; well, that was the plan. With family gathered, she could have done it, but she stumbled in the launching and fell in. It turned into a first-class Takes “laughing event,” with Sister Ruth Ann laughing as hard as anyone, while all waited for her brother-in-law, Dave’s rescue.

For any and every occasion, Sister Ruth Ann greeted all her family with a hug and a kiss. Her nieces and nephews said that she was “just fun.” And as they grew to adulthood, she continued to support them. One of her nieces chose to become a Catholic School teacher and principal, a cause dear to the heart of Sister Ruth Ann. No Catholic Schools Week passed without a call of interest and support from Sister.

Sister Ruth Ann absolutely loved life! Exuberant in ministry, seeking always to serve, she sang and danced her way into the hearts of those with whom she worked and to whom she ministered. Full of life and joy, involved in family, community, and full-time ministry, and not yet 69, her family and community were reluctant about her leave-taking when she was diagnosed in mid-January with ovarian cancer.

When rest and nutrition failed to give her strength, and treatment was not recommended, Sister Ruth Ann came to Mount Loretto, where just two and a half years earlier she had served a seven-year term as house coordinator. Sisters, young and old, and employees from all departments lined first and third floor halls, an extensive honor guard, characterized by tear-filled eyes and words of blessing.

So in touch with God, Sister Ruth Ann demonstrated her Kingdom-kinship by a truly awesome acceptance of her illness. In spite of her weakness, she was so in-touch with family and community, so present to each person, and when anyone stopped to see her she called each one by name, in her usual loving-inflected manner.

In her last days Sister Ruth Ann spoke of her love for life and for all those with whom and to whom she ministered. She said, “I did my best; I did my very best.” She did!

If you would like to make a memorial gift in memory of Sister Ruth Ann, click here.