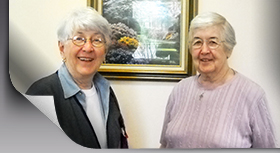 A Heart of Hospitality

The month of November began not only with the celebration of the Solemnity of All Saints, but also with the funeral liturgy of Sister Sheila Kane. Father Doug Wathier’s homily united her love for music and people: “It is a beautiful interlude in the song of grace that we gather in memory of Sister Sheila on today’s Feast of All Saints. Saints are people who weave together the glorious promise of our inheritance … with the challenging words of Jesus about where God’s blessing lies, not on the rich and powerful; but on the poor, the hungry and the tearful … In her company people felt welcomed and at ease. She put on compassion, kindness, humility, gentleness and patience; and helped people find hope in God’s love for them.”

That love took root in the home of Bartholomew and Pearl (Byrne) Kane, 94 years ago, on June 29, 1923, as she joined her two older brothers, and paved the way for her two younger sisters and two younger brothers on West Hill in Dubuque. Almost on their doorsteps, St. Columbkille Parish and School, and the Presentation Sisters, nourished that faith-filled love. Even before graduating from the parish school, as a senior, she began secretarial work at the chancery, which she served until her entrance into the Sisters of the Presentation in 1945. Her name at the time of reception, Sister Mary Sheila, was inspired by St. Cecilia, patroness of musicians. Sister Sheila’s final profession was on May 3, 1951.

A bachelor’s degree from Loras College in Dubuque, and a master’s degree in music from the University of Notre Dame served her well as she brought music into the hearts of students and parishes across Iowa in Danbury, Storm Lake, Sheldon, Farley, Whittemore, Osage, Charles City and Iowa City, and in Winner, South Dakota.

In the 1980s as pastoral minister at St. Thomas More in Iowa City, Sister Sheila’s gifts of tender-hearted hospitality found a home. On the first RCIA team in the Diocese of Davenport, she warmly welcomed those exploring their faith within the Catholic Church. She was instrumental in establishing an ecumenical “free lunch” program that continues to serve over 100 meals daily, six days a week. Her prison ministry at the Oakdale Correctional facility would later inspire her to correspond with other inmates.

Sister Sheila’s heart for hospitality blossomed as hospitality coordinator at Mount Loretto, where she never quite fully retired.  She graciously welcomed guests at the front door, the chapel, dining room and wherever they might roam! Her deep regard and interest in her own family was extended to others in her concern for them and their families.

Besides her spirit that welcomed people in, she reached out into the Dubuque community. Her engagement with the interfaith group, Dubuque Area Congregations United (DACU), involved respectful cooperation among people of diverse backgrounds to foster awareness and understanding of human needs. DACU’s sponsorship of the annual Crop Walk counted on her expertise for many years.

Sister Sheila’s unwavering sense of loyalty embraced her Irish roots, her love for family, her classmates, community members, co-workers, the Fighting Irish of Notre Dame and many with whom she served. Her generosity of heart would include thoughtful remembrances, including Hallmark greetings, often unsigned so the card became the gift, and practical gifts of notecards and stamps. Feasts were meant to be celebrated, and often included the richness of walnuts in her creamy fudge, divinity and penuche (Mexican fudge).

Besides her interest in the news and political discourse, she also kept abreast of the sports world, theatre, film and the fine arts. She actively participated in Presentation discussions and the annual community gathering. Centering prayer, especially in a group, was a great grace in her spiritual journey.

As Father Doug reflected, “Sister Sheila practiced a faith that manifested her belief that God blessed the poor, the hurting, the peace making and the meek … In her honor may we be the ones to bless people and places and things, and in doing so bring God’s life to our corner of the world.”

Sister Sheila’s chosen Scripture reflects her heart for hospitality, “There are, in the end, three things that last: Faith, hope and love, and the greatest of these is love.” (I Corinthians 13:13)