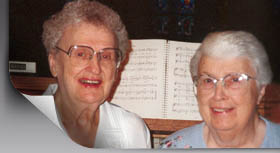 A Woman of Wisdom and Wit

“Softly and tenderly Jesus is calling, calling for you and for me to come home. Come home, you who are weary come home, earnestly, tenderly Jesus is calling, calling for you to come home.”  This song was sung as we gathered to welcome Sister Dominica Schumann’s body home to Mount Loretto. These were the same words Sister Dominica heard Sunday morning on May 9, 2010, as she left her community in the early hours to go home to her Lord.

Sister Dominica, Beatrice, daughter of Frank and Clone Schumann, was born on May 30, 1916, in the small town of Lawler, Iowa. Living near the school and the Presentation sisters, Sister Dominica spent a great deal of time with the sisters as she grew up. Having been taught by them, she often said her vocation came out of her close relationship with the sisters.

Sister entered religious life in September 1934 when she journeyed  from Lawler to Dubuque, Iowa, to join the other young women who were entering, who would become her life-long companions and friends.

She received her bachelor’s degree of Music from Loras College in Dubuque and DePaul University in Chicago, Illinois. Sister’s career in music as a classroom teacher, piano and organ teacher, parish liturgist and adult choir director spanned over 50 years. Her ministries took her to Ryan, Humboldt, Monona, Whittemore, Storm Lake, Charles City, Algona, Waterloo and Waukon, Iowa. Often it was said that she could make the piano and organ sing.

Retirement in 1986 came with ease as she continued to use her music skills as a musician and liturgist. She could also be seen with a watering can and clippers as she cared for the plants around the motherhouse. Sister Dominica would say, “I enjoy watching a plant flourish by the simple work of my hands. The end result is always amazing to me,”

Whether it was playing the piano for a sing-along, enjoying a delicious meal, a drive in the country, watching Josie, her friend’s dog or visiting with family and friends, Sister Dominica knew how to enjoy life to the fullest.

Father Doug Wathier, chaplain at Mount Loretto, reflected on Sister Dominica at her funeral liturgy, “In my experience, Sister Dominica was a real day brightener. There was a sparkle in her eye. She was committed to her family and her community. A wry observation, a quick comment, a killer smile - that was Sister Dominica. She was kind and generous. She was stubborn and outspoken. She was utterly fun. She was big on life and big on people. Sister Dominica was a straight shooter and a truly loyal friend. She was a maker of music and a healer of hearts, a purveyor of laughter. Her music was a reflection for her zest for life. And her life was a reflection of her faith. Today we give thanks for the many ways she brought Christ to life – over and over again. She helped people hear that wonderful human song.”

We rejoice that she did hear the Lord say to her, “Come home, come home, you who are weary, come home.” Indeed, Sister Dominica was weary as her last months and weeks were marked with rapidly declining health. While her friendship will be missed, so will her sense of humor and her spice for life.