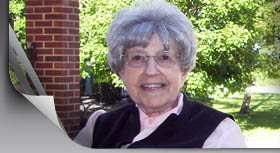 Sister Lawrence Mulligan might be characterized as an “always person.” Always courteous and gracious, always congenial and pleasant, always positive and friendly, Sister Lawrence warmed any room or setting in which she found herself. Likewise, she always wore a smile with her coordinated clothes.

Sister Lawrence so enjoyed reading the newspaper, and in her later years spent hours doing so. As a Dubuquer, she was interested in all things pertaining to Dubuque, and as a social studies teacher, she was interested in world and national news. Perhaps that contributed to her being an excellent conversationalist, along with her desire to bring an interested presence to the table or the parlor.

Sister Lawrence, at age 92 and looking 52, had ten siblings, five of whom preceded her in death and five of whom survive her. While she was growing up, her home was at the end of the garden path of the 1229 Mount Loretta Avenue Presentation motherhouse, the Presentation’s closest neighbor to the east. Living so near the convent and attending school taught by the Sisters of the Presentation at St.Columbkille, it’s little wonder that this oldest daughter of James and Lena Mulligan chose to become a Presentation sister.

Having received her bachelor’s degree from Loras College, Dubuque, Iowa, and her master’s degree from Creighton University, Omaha, Nebraska, she did graduate studies at the Catholic University of America, Washington, DC. Sister Lawrence made good use of her education; her teaching career spanned 55 years, taking her to Waukon, Algona, Lawler, Humboldt, Osage, Farley, Storm Lake, and Dubuque, all in Iowa.

Her ministry experiences, which demonstrate her versatility, included elementary, middle school, high school and part-time library staff at Wahlert High School in Dubuque (1987-1993). With her entire religious life centered in the field of education, she taught CCD classes, went on several service projects and worked with the Legion of Mary as a spiritual director. She retired to Mount Loretto in 1993, where she used her library skills in the motherhouse library for a number of years.

While the most common image we carry in our minds might be that of Sister Lawrence reading the newspaper, in addition to reading she also enjoyed theater, music, crafts, travel, prayer, community service – and the celebration of holidays and special occasions with her family, who during her retirement years in Dubuque, included her in their invitations.

Over the years Sister Lawrence demonstrated some endearing mannerisms. She punctuated her conversation with chuckles of laughter and held her water glass or her teacup with her little finger extended, curved ever slightly, in a most genteel manner. Whatever else she did, Sister Lawrence was always a perfect lady.

One question needs to be raised, “Has anyone alerted the heavenly dining room to stock up on hot chocolate?” In the earlier days it wasn’t on the menu, but a special retirement-benefit for “Lawrency,” as she was affectionately called, was the regular serving of a colorful mug, steaming with hot chocolate. Her response to this treat projected such delight that student servers vied with one another to deliver the hot chocolate to their favorite recipient.

Born in Dubuque on the feast of the Holy Name of Mary, September 12, 1917, Sister Lawrence entered eternal life on March 19, 2010, the feast of St. Joseph, patron of a happy death. She seemed to have had “heavenly connections” from beginning to end. How fitting the words of the gathering song for her wake service: “Softly and tenderly Jesus is calling, calling for you to come home.” Go now in peace, faithful friend of God.