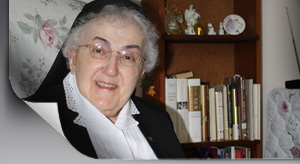 A Woman of Exeptional Strength

She probably needed broad shoulders to carry her long name: Sister Mary Concepta Joseph Milinski. And she needed broad shoulders to carry the burdens of her life’s challenges. Diminutive in physical height but lofty in personal stature, she demonstrated exceptional flexibility in her acceptance of life’s vicissitudes. The personal cost of on-going transitions characterized nearly every dimension of her life.

Orphaned as a child, Sophie learned early in life about God’s providence. She was no stranger to extenuating circumstances, and the changes these circumstances brought. As a child, the illness and death of both parents disrupted the lives of this young family, when the four children went to separate homes and families.

As a small child Sophie had lived in one of New York’s Polish neighborhoods. Though steeped in her Polish tradition, it was the Irish Presentation Sisters in Staten Island, New York, who received Sophie and her siblings into the orphanage the sisters had founded. Later, as a young adult she joined their community. Living with the sisters she knew and loved in the Staten Island community was, however, short-term.

A group of four Staten Island Presentation Sisters responded to the invitation received by their community to establish a foundation in Oregon, Illinois. New-member, Sophie Milinski, was invited by Mother Regis to join them. She became the fifth member to travel to Oregon, ever so far from her family in New York.

The Oregon venture, too, proved to be somewhat short-lived when circumstances necessitated the group’s transferring to the Dubuque Presentations. These multiple moves pulled on Sister Concepta’s heart strings and, practically speaking, meant disruptions in plans, programs and colleges as she worked to obtain a degree.

As time went on, like many of her peers, Sister experienced ministry in a variety of parishes, taking her to 12 different locations in four midwestern states, marked also by a diversity of ministries: kindergarten teacher, middle-school teacher, religious education director. In retirement she volunteered for the foster grandparent program in several different schools and ministered to severe and profoundly-disabled children at the Hills and Dales Child Development Center in Dubuque.

More transitions were in store after Sister completed her active retirement ministry. There were the transitions that were part of community living and updating. She, likewise, changed rooms within the house four times and underwent 10 major surgeries in the last 15 years. Transitions stalked her at every turn. And through it all God groomed her soul to reflect God’s self.

Some things, however, perdured with Sister Concepta: her warm, sparkling brown eyes and one raised brow, her characteristic speech patterns tinged with a Polish accent, her prayerful hands and heart, her creativity and motivation in the classroom and her gentle, humble manner.

Wherever Sister Concepta ministered, she surprised herself by the long line of friends she gathered, each one being quite certain that she or he was her best friend, because each was treated with respect, attention, appreciation and affection. She was an excellent communicator, thus endearing herself to others. She kept in touch through thoughtful contacts and faithful correspondence with a multitude of friends and family members, evidenced by the reciprocal number of visitors, phone calls, gifts and flowers she received, as well as her extensive Christmas card list.

An exceptionally private person, Sister Concepta rarely shared her personal story. Instead she focused her attention on “the other,” manifesting joy and delight in the encounter of each individual friend, companion, student. Actively living the Gospel mandate of love, she reached out; that’s how she lived her life. And she was loved in return.