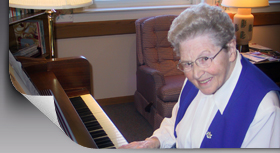 Scripture readings, selected by Sister Madonna Meyer for her funeral liturgy trace the Christian journey of hearing God’s call, responding and faithfully living the call. No coincidence; that was Sister Madonna’s life story.

The community welcomed her body home by singing, “I have loved you with an everlasting love. I have called you and you are mine” – a perfect theme for Sister Madonna, her vocation, her life in the Lord.

Madonna’s life brimmed with love, the love of her family and friends for her, her love for them and her love for the God who had such a hold on her heart that nothing could separate her from this God. As a young woman, Madonna had a good friend, a young man who loved her and asked her to marry him. His offer was flattering and appealing, but Madonna chose instead to follow her vocation to religious life.

Sister Madonna’s vocation story reads like a romantic novel. While she didn’t ride off to the convent on the back of a white stallion, there is a good bit of romance surrounding the narrative of her entrance into community.

The oldest daughter in her family, Madonna was the apple of her father’s eye. He, a dominant man, talked to his daughters about becoming sisters. Madonna listened to his wisdom and experienced God’s call. When she told the family of her plans to enter the convent, her sisters could only imagine their lonesomeness. At the time, there were no home visits. Her father and brothers worked to dissuade her. Responding to the hurt feelings created by her announcement, Madonna, 24-years-old, agreed to wait yet another year before leaving. She kept her word. But when the year was up, she eloped with the Lord. Madonna could have been the vocation poster girl of the 1950s.

An excellent musician, Madonna played the organ for all the Masses in her home parish, St. Joseph, Key West. It was Madonna’s gift to the Church, but perhaps more significant was the sacrifice her family made: to leave the farm early every morning to drive her to Key West, go home for chores, drive in again to pick her up and return home.

In September 1949, she got a ride to morning Mass, as usual, with her brother, Harold, and played the organ. When her brother arrived to pick her up, however, she wasn’t there. Plans had previously been made by Madonna, Mount Loretto Convent and the parish pastor, that on this particular day, after Mass, the parish custodian would drive Madonna to Mount Loretto. The pastor would then break the news to her brother.

It was a painful experience for all concerned. Madonna did not want to hurt her family, but felt she had run out of options. She left home that morning with nothing but the clothes on her back. She traveled to Dubuque in the back seat of the car, with her head down so that no one in the village would see her and report to her family.

The Isaiah reading affirms: “The Lord God will wipe the tears from all faces.” There were many tears on the part of Madonna and her family, but in time wounds were healed, and no one was more pleased or proud than brother Harold and her father.

Always gracious, appreciative, and considerate, Madonna never talked about herself or drew attention to herself. Center stage was not a comfortable place for her. She was, however, a natural jazz pianist; it seemed her touch was like none other – her music sheer delight for her and her audience.

In high school and beyond, Madonna led a popular music combo, with weekly engagements. Gifted with extraordinary musical talent, she shared her talent throughout her life, in ministry and in friendship. Even in retirement, she wanted her music, most of all, to make others happy.

Singing for joy, Sister Madonna now rests securely in the arms of the God, who has always been central in her life. Her community and her family will forever feel a Madonna-hole in their lives.