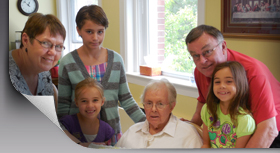 An Champion of Justice

Mary Eva Mauss, daughter of Joe and Julia (Blake) Mauss, was born on August 18, 1925. Twenty years later she entered the community of the Dubuque Sisters of the Presentation.

During her 14 years of retirement Sister Bernard enjoyed reading, puzzles, card playing and spending time in prayer, as well as visiting and entertaining family and friends. Shortly before her retirement Sister was named “Champion of Justice” for her faithful endeavors in the causes of justice and peace; she received the first award for this title from the Sioux City Diocese. During her retirement years she continued to be concerned about and involved in social justice issues with a focus on rural life: family farms, rural poor and the environment, particularly through her participation in the ecumenical organization of the Churches’ Center for Land and People (CCLP).

As a product herself of a small family farm and rural upbringing, Sister was passionate in her love of nature and her “Willa Cather” kind of devotion and care for the land. In conversations and in written communication, she made her ideas known, while not the least intimidated by politicians.

Sister Bernard was a no-nonsense person, a woman of substance, with both feet planted firmly on the ground, dutiful and unassuming. She followed the guidelines of the prophet Micah to live justly and to walk humbly. There wasn’t any place she couldn’t go in her black skirt and simple white shirt-waist blouse. Vanity claimed no part of her.

Her classmate, Sister Sheila Kane, shared that their group of novices had been self-named “The Seraphic Seven,” admitting that Sister Bernard was probably the only one who came close to fitting the name. Steadfast in faith, conscientious and rule-following, Sister Bernard had a calm, reflective, unhurried demeanor. She walked slowly and talked slowly, and it took her forever to tell a story or recount an incident.

She might be further described as a woman of soul-strength and simplicity, she had an endearing openness to God and to all those she met. Outgoing and friendly she reached out to others; no one went unrecognized because hospitality was important to Sister Bernard. She made a concerted effort to greet and meet any and all Mount Loretto guests with her well-used introduction, “I see we have some important people here today,” at which point her smile would be returned and she would learn the names of the guests and from where they came. If they happened to be from Dubuque she would mention that she had a brother in Dubuque, John Mauss, Chief of Police, whom they might happen to know – and they usually did. And so the conversation would continue. Her outgoing, cheerful and friendly demeanor was rewarded when she celebrated her jubilee in Dayton, Iowa; the whole town turned out, though Catholics made up the minority in this small Iowa town.

Another of Sister Bernard’s well-used reminders offered inspiration: “I loved every minute of my teaching but I made up my mind when I retired that no matter what, I wasn’t going to complain.” And she didn’t! Her example endures.