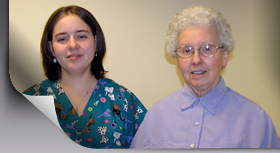 Sister Louis McCormick, one of 11 children in the Rose and Edward McCormick family, had a heart for ministry. With a bachelor's degree from Loras College, Dubuque, and a master's from the University of Vermillion, South Dakota, Sister demonstrated her versatility by contributing to six different ministries. Perhaps most challenging and rewarding among them was her long-term assignment as resident manager of a senior housing facility, Ecumenical Towers, in downtown Dubuque. Here Sister Louis spent long days and short nights, on duty 24-7, for 16 consecutive years. For her it was a ministry of love. She delighted in each of the residents and supported them with love and personal concern. When they were happy, she was happy. When they wanted to play cards, she played cards; when bingo was the choice, they had a bingo game; for birthdays and special occasions she offered a party. The shy and the reclusive were encouraged to join the socializers. No one was overlooked; no one left out. Was it any surprise they loved her?

Sister Louis had an exceptional concern for children. In the schools where she ministered she was aware of and provided for those in need – children who lacked adequate school supplies and those without caps and mittens in the winter. She was attentive to the girl whose mother was under psychiatric care, the family who lost a parent due to cancer and the boy who hurried to school from the farm chores without washing his hands. (If she directed him to the bathroom before the others arrived, he wouldn’t get teased.)

It was often said of her, “She loved children.” We might ask the familiar question, “But where did she get all this caring?” Was it from the large family of which she was a member? Or was it because she was paying attention? Jesus said, “Let the children come to me.” Nano set an example, spending herself instructing the children of the poor. Jesus said, “Blessed are the poor…” Mother Vincent and her three companions traveled an ocean to be of service to the poor Irish children of Iowa. Jesus said, “Whatsoever you do…” Yes, Sister Louis was paying attention.

Father Doug Wathier, chaplain at Mount Loretto, read the Gospel of Matthew whose beatitudes formed the framework for the homily at Sister’s funeral. Father linked Sister Louis’ life to the beatitudes where Jesus invites his listeners to experience happiness by the way they respond to others: in gratitude, compassion, courage, awareness of needs, kindness, openness and purity of heart. As evidence of these gifts unfolded in examples from Sister’s life, Father Doug summarized her life as “Woman of Blessing.”

Fifty-five years of ministry found Sister Louis in classrooms, the principal’s office, religious education ministry, parish ministry, resident management, and later ministering to the elderly and homebound. She did it all. At her 60th jubilee she commented, “I was happy to give as much as I could as long as I could for the poor and needy.” And she certainly did. And she was happy. Sister Louis enjoyed a good joke, playing cards, walking, dancing and music. A special joy of hers was sharing Presentation life with her younger sister, Sister Dorothy.

With a heart as big as herself, Sister Louis always wanted to give to others: gifts, a good time, assistance, whatever she had. When the children across the street from Mount Loretto sold lemonade to buy a dog, she wanted to give her entire monthly allowance to help the cause. “I don’t need the money,” she insisted. “Give it to the children – for the dog.”

When her health started to fail in her retirement years, Sister couldn’t always finish her sentences, so she would complete the message with a kind of nonsense rhyme, using the same syllables each time her mind failed to conjure up the intended words. Sister Rosanne Rottinghaus shared a similar incident. When she asked Sister Louis a question and she couldn’t come up with an answer, even after a reflective pause, Sister Louis dismissed the whole idea with, “I don’t think God wants me to give the answer to that question right now.”

As dementia robbed her of nearly all her words, it did not stifle her personal communication. Sister Louis offered the warmest smiles of welcome and the brightest eyes of delight for her visitors, along with her silent but lively invitation to dance to the music of her hummed melodies. During her lifetime of living the beatitudes in ministry, and her 12 years at Mount Loretto motherhouse, Sister Louis McCormick has been, indeed, a “Woman of Blessing.”