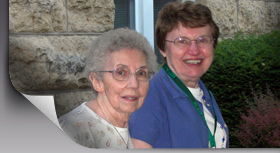 Born in Lawler, Iowa, daughter of Ambrose and Florence (Canty) Goss, Margaret Mary joined the Sisters of the Presentation in 1941, receiving the name Sister Mary Eugene. She professed her perpetual vows on May 16, 1947. Sister earned a bachelor’s degree from Loras College and a master’s degree from the University of Notre Dame; her teaching career spanned 52 years. Her students remember her for her high standards and expectations. Following her 15 years of retirement, Sister Mary Eugene entered eternal life on May 7, 2011, joining her parents and three siblings.

Sister Eugene was both a private and a complex person, but in spite of that, one never had to wonder what she thought or where she stood on a community or a political issue. She knew her mind and spoke it.

As a social studies teacher, with a particular interest in government, Sister Eugene demonstrated an exceptional affinity for politics. She was an informed and engaged citizen, an esteemed and keen politician. Candidates for political offices sought her endorsement and acknowledged her influence.

Sister Eugene’s personality had many facets. With her green thumb and gentle care, houseplants thrived. For special community celebrations, she treated the sisters to homemade candy and walnut-filled dates, covered with powdered sugar. No matter the hours or the “cost” to herself.

Service of others often occupied her thoughts and actions. She enjoyed giving individual gifts, and with her artistic touch she loved decorating fifth floor lounge or common areas in the house. Energy, industry and enthusiasm marked her commitments. She gave 15 years of leadership to projects of the American Cancer Society and the Alzheimer’s Association – and expected the rest of the sisters to promptly submit their donations.

Sister Eugene had a good sense of humor. One of the receptionists, Sue Murphy, shared that when she dialed her room, #512, for a message, Sister Eugene would answer, “Joe’s Place.” She gave some of the sisters special attention with unique nicknames. Her morning greeting often was, “How are you, Joni Bug?”

Sister Eugene arrived in chapel early each morning, and many sisters and friends looked for her when they came to Mass. She was there, in the last row, the last chair, in her reserved seat – praying her rosary. Following the example of her beloved mother, no doubt, she was faithful to the rosary. And even when she wasn’t in the chair later in the day, her rosary was draped over the arm of her chair, ready for her return. Sister Eugene’s dad died when she was a baby, but there was no doubt about the admiration and devotion she had for her mother.

When Father Cecil Friedmann, former superintendent of Bishop Garrigan Catholic High School, Algona, Iowa, and longtime friend of Sister Eugene, contributed to the sharing of memories at Sister’s wake, an initial and enthusiastic comment was, “She was really something else” And she was!

Sister Eugene worked hard and played hard. She knew pain and loss, solitude and the public eye, contemplation and celebration. She faithfully cared for her aging mother – and hobnobbed with presidential candidates. Amazingly she could “walk with kings” and never “lose the common touch.” (Kipling) One might conclude that she lived life to the fullest, as Jesus directed when he said, “I have come that you might have life, and have it abundantly.” (John 10:10)