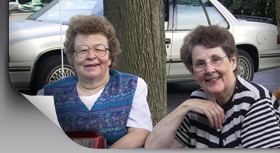 A Woman of Determination

Sister René Laubenthal, a long-time friend and classmate of Sister Maria Goretti Dullard, shares a few of her reflections about Maria, “a woman of faith, determination, persistence and a dose of stubbornness.”

Sister Maria Goretti and I entered the Sisters of the Presentation in 1952. I soon learned that Sister Maria’s parents had not only nourished her faith but had encouraged her to enter into life with all she had. In spite of her challenges, she did nearly everything we as a class did, and in addition, she could sew, which was something we couldn’t do.

I remember summers when Sister Maria and I were going to Clarke College. Sometimes we could study together in preparation for a test; she was pretty quiet during the discussions. The next day she would ace the test.

One of Sister Maria Goretti’s missions was Timber Lake, South Dakota. When visiting with Sister after her first year there, it seemed she thought there was no place quite like it. Since I had been there for six years previously and found it a great mission, I could understand her enthusiasm for Timber Lake. I thought no other mission would replace it as her favorite. Later Sister was missioned to Waukon, Iowa, and that became the great love of her life with Father Ed Lechtenberg and Sister Margaret Anne Kramer at the top of the list!

Upon retiring at Mount Loretto, Sister Maria Goretti was pleased with her various assignments, which we called “charges.” She was a receptionist and served as a relay captain, providing motherhouse information for sisters on the missions. She also sewed for the missions. Since she had sewed for Sister Presentation Dahlhauser for many summers, she again took up the task of helping Sister James Marie Gross with mission sewing. These weren’t just jobs for Sister; she prized them.

Sister Maria delighted in others teasing her in fun. Sister Barbara Rastatter would see Sister approaching and would sing out, “How do you solve a problem like Maria?” which brought gales of laughter from Sister Maria. When Randy Engler, maintenance director, would meet her along the way, he’d ask, “Now, what did you break, Maria?” and this, too, brought forth a hearty laugh from her.

Despite her sufferings, Sister Maria Goretti journeyed with faith, prayerfulness and joy until she danced into the arms of God.

If you would like to make a memorial gift in memory of Sister Maria Goretti, click here.