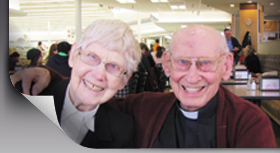 A Woman Of Grace And Dignity

An old adage says, “Do not make her larger in death than she was in life.” But that would never apply to Sister Mary Catherine Wingert, who died October 1, 2016. What was said of her at her death and after, was almost inadequate to describe who she really was. Words fail us. Still, we try. Mary Cecelia Wingert was born to Lawrence and Mary Wingert in Wesley, Iowa, on April 24, 1924. She was truly formed by her family, whom she loved greatly, and with whom she kept in touch, especially through letters. Of the 11 children in the family, only her brother, Father Gerald Wingert is still living.

After graduation from high school, she entered the Sisters of the Presentation on August 25, 1943, making her final profession on May 11, 1949. Sister Catherine was educationally prepared to teach, and in that role, she deeply touched many lives. Subsequently she was a principal for many years. Her influence over new teachers and student teachers is inestimable. She trained teachers with gentleness and great wisdom, and she had an unusual skill with students in school. Louis Bassler, a former student and also a teacher under Sister Catherine, remarks, “She could bring a gym full of junior high students to complete silence without ever raising her voice.”

The professional testament to her skill was that in 1991, after ministering as a principal for 37 consecutive years, Sister Catherine was awarded the National Catholic Education Association Distinguished Principal Award.

Sister Lou Cota taught with Sister Catherine at St. Dorothy School in Chicago. Sister Lou comments, “Sister Catherine never wanted anyone to be hurt, so she was a mistress of diplomacy. If she thought a teacher could improve, instead of telling her that, she would go to her room and say to the students something
like, ‘Today I get a chance to teach you some math ...,’ and by doing so she was teaching the teacher in her subtle way.” Sister Lou adds, “If conversations turned negative about another, she would counter with, ‘I think there is something good within her that we need to bring forth.’ She loved having parties or fixing breakfast for staff. In the spirit of Nano Nagle, she would often fix a meal for students she knew had poor conditions at home.” Sister Catherine treated everyone with dignity. When parents had concerns, she would work with them, and they would always leave with a smile. Many times she would arrange to meet parents in the convent so that they would not be embarrassed by going to the school office where others would see them.

Sister Martha Donnelly, who also taught at St. Dorothy, has a long history with Sister Catherine. Martha’s mother was the school secretary for Sister Catherine in Mason City where the Donnelly’s lived. “Sister Catherine was a great support to my family over the years,” comments Sister Martha. “She could focus on you so intently that you felt affirmed and very special.” Sister Martha adds, “Sister Catherine so identified with the Black community that one time she came home from a workshop and commented, ‘We were the only Blacks there!’”

Sister Lou remarks, “In addition to her work in the school, she was greatly invested in the parish. Parishioners came to know her well for her presence and involvement in liturgy and in parish gatherings. After a time, the sisters moved to a parish in Markham, Illinois, a suburb of Chicago, and, again, she became very involved in the parish, while maintaining her ties at St. Dorothy.” In her retirement years she took on a new venture: she learned line dancing, and then she taught it to parishioners! When she came to Mount Loretto Motherhouse to live, she taught it to the sisters. As in everything, she moved with grace and dignity.

But perhaps the great secret of this woman’s life was that she surrounded her day with prayer, from morning through the day until its close in the evening. She knew that God would take care of everything, and she trusted God with all her heart. Her death is a great loss to the Presentation community, and her family, friends, parishioners and former students. But it is safe to say that her care for all continues even as she does a bit of line dancing in heaven!