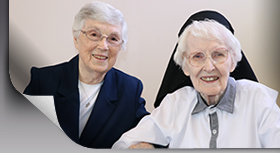 Through Music and Prayer to God

Her earthly father passed when she was quite young, and her mother after she entered religious life, yet Sister Matthew Cunningham was gifted by the love of her heavenly Father. She was surrounded by the love of her brother Don, her sister Joan, her aunts, uncles and cousins and her Presentation community.

She spent a life time learning to give her best – to rise above her faults, to let her tenacity change to humility, to receive graciously, to trust others and to believe that all she had to do was to let go and let God lead her to the Kingdom.

Sister Matthew’s pathway to God was that of music. God gave Mary Catherine Cunningham the gift of music in childhood. Music became the work and prayer of her life, first by working for the Presentations Sisters in Clare, Iowa, so that she could receive music lessons; then, by joining them in religious life and sharing that gift with others.

Sister Matthew’s life-mantra became, “I will give glory to God through music.” It was as if she were an instrument in God’s hands, in God’s voice. Music revealed her soul and she was most comfortable with music as her inner voice.

A talented pianist and organist, Sister Matthew enjoyed many kinds of music – classical, liturgical, folk, popular, and jazz. She learned to play a variety of instruments, focusing on piano, organ and violin and developed the gift of music in students for over 50 years. She loved working with others, preparing them as cantors, choir members and instrumentalists for liturgies. She once stated, “I could make a difference in their singing and that was a great joy to me.”

Sister Matthew cherished the standard and traditional hymns, and she enjoyed gospel songs and contemporary Christian music. She moved with the flow and changes in liturgical music through the years after Vatican II. Whether accompanying or providing instrumental versions, she sang, played and danced the music in her soul.

Through the years Sister Matthew mixed humor and creativity by writing parodies for many occasions. As a trained musician and word-smith, she had high standards for rhythm and rhyme. All the rest of us had to do was perform her works as perfectly as we could!

Sister Matthew learned to play. She enjoyed word puzzles and the Chicago Cubs. She maintained friendships. She kept in touch with relatives, friends and former students via email, about which she was known to have said, “not bad for a woman of 80-plus years young!”

She was very proud of her brother Don and his work in the U.S. government. She loved time spent with her sister Joan Cunningham, a Sister of St. Joseph from Orange CA, especially when they traveled to ten European countries including Medjugorje, Yugoslavia.

Prayer and her relationship with God were always important to Sister Matthew. She loved the Blessed Virgin Mary. Praying often and in many ways, she fingered the beads of her rosary, observed traditional Presentation devotions, attended local prayer groups and enjoyed Mother Angelica and the Eternal Word Television Network. There was a hunger in Sister Matthew’s soul.

After retiring Sister Matthew enjoyed playing piano and organ to accompany at Eucharist and prayer. She practiced piano up to recent months until she realized that, when struggling to bring forth the notes, she was being called to turn over the keys to the Lord.

With the celebration of Sister Matthew’s resurrection to new life, we take consolation in the Book of Wisdom as it promises hope that those who suffer will be found worthy to abide with God in love and know peace.

In the first letter to Thessalonians, we take courage that we will receive the grace to rise to the best of ourselves in God.

We sing Psalm 25 trusting in God to teach us truth, justice and humility and come to know kindness and friendship with God and each other.

And, following Matthew 5:1-12 we rejoice and are glad and empowered to become “beatitude people,” people of God’s Kingdom.