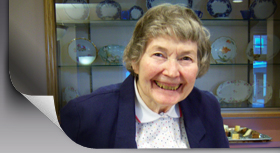 Sister Mary Kevin (Beverly) Cummings was born in Waterloo, Iowa, daughter of Francis and Eula (Lamb) Cummings. She entered the Sisters of the Presentation at the age of 17, the youngest member of her postulant group. She received her bachelor’s from Loras College, Dubuque, Iowa, and her master’s from Rosary College, River Forest, Illinois. She did further graduate study at five additional universities. Her active ministries as teacher, librarian and archivist took her to 12 different locations over a period of 58 years.

An elementary and a high school teacher, Sister also worked with religious education classes and summer religious vacation schools. She was a TAG (Talented and Gifted) volunteer, participated on RCIA teams (Rite of Christian Initiation for Adults), was a volunteer hospital chaplain, helped tutor immigrants in English and took Eucharist to the homebound. In her retirement she spent hours using her archivist skills to update community annals.

Sister Kevin was an accomplished poet and enjoyed doing artwork, photography and playing the autoharp and harmonica. An ongoing pattern was her generosity in sharing her knowledge with anyone interested. Whatever she did, she did it wholeheartedly and with competence. She was a totally participative person, whether she attended a staff meeting, a community gathering, a prayer service or a party. She gave her all.

Possessing a brilliant, creative mind, Sister Kevin was a life-long learner. Industry characterized her days and nights. There was always another chapter to read, another person to remember, a poem to write, an article to send. She had a deep-rooted family faith and an Irish heritage, which she wore well, not only in green attire, but also in the pink glow of her Irish complexion.

Sister Kevin’s heart surged with compassion, her head spilled over with insights, her soul burst with poetry. Sister Kevin could not not write. She had to write, and she did – thousands of poems. She wrote everywhere and on everything. She wrote in the chapel and in her hospital bed; she wrote on airplanes and in the elevator. She wrote on the backs of menus and in the margins of her own correspondence; she wrote on scraps of envelopes, in her notebooks and on table napkins. Her muse was relentless and poetry bubbled forth.

Contemplative, as well as creative, Sister Kevin composed poetic reflections for the Sunday Scriptures – every Sunday in the entire three-year liturgical cycle, plus all major feast days, as well as poems for jubilees, birthdays, anniversaries, and all manner of special occasions. If anyone needed a poem for some reason, she provided “poetry on-tap.”

Kevin was a reader, thinker, scholar, writer, poet, artist, mystic, and humorist. Her bliss manifested itself in her jokes, her chuckles, her stories, and the adventures she shared. Her wit was priceless, offering free entertainment at mealtimes. She literally beamed with on-going delight. Her eyes twinkled just thinking of human antics and the foibles of humankind, and her infectious smile often had an impish quality to it.

Recently Sister commented, “When I get settled in heaven, I’m going to dance, play musical instruments, sing and paint.” The closing poem, one she wrote for another sister, expresses a lived experience and her celestial plans:

by faster than the last. Does

each still have ten years?

Reach out and take his hand; the Lord is asking for this dance.