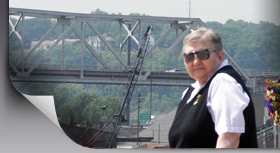 Queen of the Ordinary

Mary Evelyn Church, know in religion as Sister Mary Dominic, entered the Presentation community from Council Bluffs, Iowa, in 1949. The daughter of Olive (Cushing) and Guy Church, Mary Evelyn, the youngest of their four children, attended Holy Family Grade School and Thomas Jefferson High School. She continued her education by earning her teaching certificate from Iowa State Teachers College (now UNI) in Cedar Falls, Iowa, before she joined the Presentation community. Subsequently she earned a bachelor’s degree from Clarke College (now Clarke University) in Dubuque and a master’s degree from the University of Notre Dame, both degrees in math.

First an elementary and then a high school math teacher, Sister Dominic served in nine different schools, teaching math, computer and related courses, as well as sponsoring curricular and extra-curricular activities. She didn’t seem like the “cheerleader type,” but her cheerleader-drill teams won accolades in contests, even going to state, and often was cited for their skill and creativity. Likewise, the Fort Dodge Chamber of Commerce presented a Golden Apple Award to Sister Dominic in 1999, in recognition of her teaching excellence.

Generosity was more than an occasional virtue for Sister Dominic; she was always ready and willing for whatever work or service was in order. At the time when fewer sisters had a driver’s license, she made herself available for driving whenever and wherever someone might need a ride.

When her mother was being cared for in Dubuque and Sister was missioned in Cedar Rapids and Fort Dodge, this faithful daughter traveled to visit her mother at least every other weekend.

Sister Dominic joined the finance team at the motherhouse in 2001 and retired in 2007, enjoying her hobbies of walking, reading, doing puzzles and crocheting multiple afghans for the homeless in a poor parish in Chicago.

Clothed in simplicity, a kind of “queen of the ordinary,” Sister Dominic had both feet planted firmly on the ground. The psalmist might have called her stout-hearted, for she was steady, independent, responsible, patient, other-centered and low maintenance.

Her career spanned 64 years, and during her active ministry Sister Dominic was very much “in-charge” but as she continued her journey, her shining example was rather in her acceptance of whatever came next: discontinuing a favorite volunteer role, giving up her driver’s license or moving to a different floor for more assistance. And in the two years of dealing with cancer, she didn’t so much as mention her illness, nor did she complain.

While her ministry years were marked by industry and determination, it seemed her later years served as a time for developing new virtues: gentleness, meekness, detachment, gratitude, a kind of ego-less-ness and surrender. A short poem by Jessica St. James offers a summary: “A life well-lived leaves its gentle pattern on the hearts of all … and the world is a lovelier place because one person touched it with kindness and goodness and grace.” And that was Sister Mary Dominic Church!