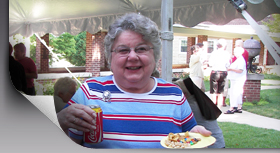 Juanita Marita Boom, formerly Sister Mary Theodore, was born in Dubuque, Iowa, on October 9, 1928. She began her elementary school education in Dubuque until the family moved to Aredale, Iowa. She graduated from high school in nearby Dougherty where she was taught by the Sisters of the Presentation. Sister Juanita was proud to claim both Dubuque and Dougherty as her home.

In September of 1946 Sister Juanita entered the Sisters of the Presentation community, professing her final vows on May 5, 1952. With a bachelor’s degree from Loras College and later an LPN diploma from Hawkeye Institute, Sister Juanita’s ministries included teaching, nursing and pastoral ministry. Sister retired in 1985 after 35 years in active ministry.

Following her retirement, Sister served as a receptionist and driver at the motherhouse. For recreation she enjoyed tatting, reading, watching television and walking but as her breathing problems increased her walking days decreased. Sister loved nature and missed her outdoor nature delights, but continued to enjoy the change of seasons as she admired “her tree” outside the west window of her room.

In his homily at Sister Juanita’s funeral, Father Doug Wathier described Sister Juanita as an adventurous woman who “colored outside the lines.” Her adventurous spirit was satisfied by her varied travel opportunities, frequently from Dubuque to Dougherty to Davenport, and beyond to Missouri, Mackinac Island, New England States, as well as Ireland and China.

Both qualities identified by Father Doug were evidenced in Sister’s likes and interests, not necessarily the “run of the mill” type, which also changed as she journeyed through life. Sister Sheila Kane remembers her entertaining the members of their novitiate by “yodeling,” an exceptional talent. Yet when asked to list her interests many years later Sister Juanita included listening to classical music, reading novels and watching television programs, programs as different as “Days of Our Lives” and “Dancing With the Stars” along with the Discovery and History Channels, as well as national and world news, determined to keep abreast of current events. A good conversationalist, Sister shared her interests, opinions and concerns of happenings beyond the motherhouse.

Sister Juanita had a unique manner of looking at life which included naming objects in her care. Her wheelchair was Sophia; Freddy, the cart used to move her oxygen tanks; Shakespeare, her coveted computer and one of her plants was Penelope. When asked why she did this she said that the names made them more personal, not just “things” but her things.

Sue Brimmer, a nurse in the Nagle Center infirmary at Mount Loretto, said she felt that Sister Juanita knew for some time that she had a debilitating condition. She confided that she was not afraid to die but that she wanted to extend her life and enjoy it to the fullest as long as this was medically possible. Once she realized what God's plan was for her, she modeled an example of acceptance. As included in the homily, “God was her stabilizing force and strength.”

Sister Juanita had sheer enjoyment and total delight in the good things of life: nature, fine food, travel and recreational experiences. She had a good time; she enjoyed the celebrations.

Sister found the image of the Trinity, Father, Son and Holy Spirit engaged in an eternal dance of love to be compelling. When Father Doug anointed her a few days before she died, she told him she was at peace. In life’s struggles she would hear Christ remind her that he was close to her and would stay close to her. Then she said, “I’m still dancing.”

Sister Juanita chose this reading from Jeremiah 6:16 for her funeral liturgy aid: “Stand at the crossroads and look, ask for the ancient paths. Which was the good way? Take it and you will find rest for yourselves.”

Sister Juanita has found the “good way,” and has been invited to join the Trinity in the eternal dance of love in her new home, along with her family members and her Presentation Sisters.