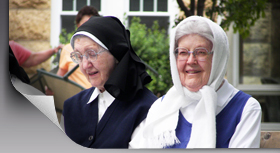 Born in Dubuque, Iowa, daughter of Jerome and Johanna (Sullivan) Feeney, Imelda Gertrude joined the Sisters of the Presentation in 1937, receiving the name Sister Mary Angela Feeney. She professed her perpetual vows on July 31, 1943. Sister earned a bachelor’s degree from Loras College, Dubuque, and a master’s degree from Catholic University, Washington, D.C. Her teaching career spanned 49 years and took her to Waukon, Charles City, Clare, Dubuque, Mason City, Farley, Storm Lake and Algona, all in Iowa.

With her entire religious life centered on “making a difference,” she was a teacher, a principal, a parish minister to the home-bound and elderly, an archivist and one of the first volunteer tutors for Presentation Lantern Center. In addition, she took loving care of her sibling, Presentation Sister Joanne Feeney, for many years.

Sister Angela, always the conversationalist, was ever ready to share her learning from reading, media or other conversations. She shared her tutoring skills with many students both at the Lantern Center and, in later years, at Mount Loretto as they came to her. One particular tutee was Sister Eppie Shirma of Ruaya, Tanzania, who stayed at Mount Loretto for a year to study theology at Clarke. For all those Sister Angela tutored, it was not just a matter of offering English language skills; she became a mentor and guide to her students. The daily concerns and joys of her students became integral to the conversations.

Brother Leo Ryan, CSV, one of Sister Angela’s students from St. Patrick School in Waukon, Iowa, cherishes his memories of her. “Sister Angela became a lifetime friend with significant educational and vocational influence for me. I was a freshman at St. Pat’s in 1940 when Sister Angela arrived on her first ‘mission.’ She was assigned as our freshman homeroom teacher,” he shares.

“Sister Angela was an exceptional teacher; specific in her assignments, demanding about spelling and punctuations but encouraging and helpful in guiding story development. She was a major influence in developing my writing skills, interests and talents,” adds Brother Ryan whose writing skills have paralleled his lifetime career as a high school teacher, university professor and published writer.

As archivist, Sister left her mark on the congregational archives. She transcribed many of Sister Anastasia Burns’ oral history tapes, thus preserving personal recollections by and about the sisters which might otherwise be lost in the deterioration of the tapes themselves. One of her projects was the acquiring of information for the mission files. She worked tirelessly to fill in the gaps in the history of each mission, requesting stories, pictures and newspaper articles from those serving in the various places. Much of the information on file for past and present missions comes from her persistence in making requests.

Sister Angela was very involved with her associate group as long as she was able. Sister Sheila Kane, a member of the group, stated “As members of the Presentation Partners Associate Group, we looked to Sister Angela as a prayerful presence, a wisdom figure and a Presentation historian. Make no mistake, however, she was always willing to pitch in on our service projects and she also enjoyed our social gatherings.”

Sister enjoyed reading, writing and traveling. Her visits to her Presentation roots in Ireland were trips she cherished. Sister Angela enjoyed sharing her talents wherever they were needed, and she continued with prayer and community service until her death.