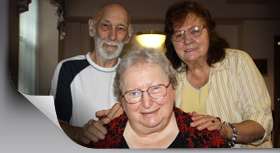 “At the end of the day, I say hello and goodbye to what has been,” says Sister Carmelle Westemeier. And, “The apple doesn’t fall far from the tree.” – two clever sayings that Sister quickly quips.

After nearly 60 years in community filled with hard work in food service and home health care, Sister Mary Carmelle Westemeier says, “I have an attitude of gratitude that carried me through the years.” That makes her happy and fulfilled.

In her formation years (1955-1958), Sister Carmelle quickly found her native talents very helpful in the Mount Loretto kitchen. There she learned many advantages of being in a religious community.

“When Sister Bonaventure Bedard would come down to the kitchen, she would offer a few words of encouragement, like ‘when you’re making a soft pie, cook the filling ten minutes longer than the crust,’ and I grew in confidence,” declares Sister Carmelle who was soon preparing an entire meal for many hungry sisters.

As the oldest of eight children, Sister Carmelle learned to take charge when she and her siblings lost their mother and younger brother to a tragic fire. While serving as food service director for the large Mount Loretto community, she found new challenges in ways of planning. “I was so grateful when I was given the opportunity to go to the University of Notre Dame and take a course from Brother Herman Zaccarelli, C.S.C., on food purchasing and managing,” she remarks.

Years later, when the Sisters of the Presentation purchased and moved to the 2360 Carter Road property, Sister Carmelle undertook the refinishing of 240 chairs and 27 tables that had been used by the residents of Mount St. Bernard Seminary from 1952-1969. She did this in the early morning hours after starting breakfast preparation for the Mount Loretto community or in-between and after the other meals of the day.

“As I look back I ask myself, ‘where did I get the energy to do it all?’” she exclaims.

Her skills and determination to do well were assets when Sister Carmelle was in charge of food service at Marion Home in Fort Dodge, Iowa, years later. Then, after she became a certified nursing assistant, her sense of humor, compassion and ability to help others were gifts that made her transition into the ministry of home health care a good fit.

As Sister Carmelle’s health has declined, she relies on her gratitude, faith and humor – a love of good time with family and community. On a monthly basis she enjoys a good game (or marathon) of cards with her sisters Peggy, Janice and Shirley, who visit her at Mount Loretto or take her for a day-trip to Peggy’s home in Manchester. “From days playing with Dad, my younger sisters or community members, I can say I have been with some ‘card sharks!’” she states with a twinkle in her eye.

Living in Nagle Center offers Sister Carmelle more in life for which she is grateful. She attends Mass and community prayer through the closed circuit television. She watches a few favorite TV programs and has her weekly card group with the sisters. She joins the community for meals in the main dining room. Recently, she had a great time participating in a special summer community boat ride. “At this time in my life, I am thankful for and remember the good years,” she concludes.

Sister Carmelle Westemeier enjoys her visit from her sister and brother-in-law, Shirley and James McDermott.