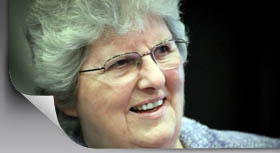 Imagine yourself in a large convention hall filled with round tables seating 800 people. Then picture that 400 of these guests are young teachers. The event was the 25th anniversary of the Golden Apple Scholars Program held in Chicago on May 11 at the conclusion of National Teacher Appreciation Week.

But this particular evening was a special event for the Presentation Sisters and the Ralph Sweeney family, because Sister Raeleen Sweeney, the oldest child of Ralph and Ileen (both deceased), received the first-ever-awarded Patricia Blunt Koldyke Lifetime Achievement Award for her years of service to the Golden Apple Scholars Program.

In 1986, Martin J. (Mike) Koldyke began a process for selecting 10 Illinois teachers each year to receive a new award, the Golden Apple Award for Excellence in Teaching because he felt that excellent teachers did not receive adequate recognition for their contributions to building a stronger, better-educated society. Recipients become lifetime members of the Golden Apple Academy of Educators, which conceives, develops and supports programs for teachers to make them more effective in the classroom.

When Sister Raeleen taught third grade in Oak Lawn, Illinois, Paul Cichowski was one of her third grade students. Years later when Paul was in college, he heard about this Golden Apple Award, and he nominated Sister Raeleen. After interviews and observation of her teaching by the Golden Apple staff, she received the award in the third year of its existence. (Years later Paul’s mother, Mary Ann Cichowski Shaefer, now deceased, became a Presentation associate with the Chicago group of sisters and associates.)

That same year, 1988, the Academy of Educators, with Pat Koldyke as director, began the Golden Apple Scholars program which drew on the expertise of the 30 Golden Apple Award winners of the previous three years. This program is designed to provide mentoring and additional training to talented high school seniors who exhibit the promise and drive to be excellent teachers. In return, these scholars make a five-year commitment to teach in Illinois schools of economic and academic need.
To be selected, a student must present a written application and seven essays, letters of reference, test scores, transcripts and complete an interview at the final stage. Beginning the summer after their high school graduation, the selected scholars spend six weeks of each summer for four summers participating in an institute planned by the Golden Apple staff and held at DePaul University and other venues. In these institutes the scholars receive advanced teacher preparation that provides in total more than three times the amount of classroom experience prior to student teaching than non-scholars receive. In addition, they build invaluable networks of support which continue into their teaching years. They also receive tuition assistance for college and for the summer institutes. Scholars must maintain a specified grade point.

In 1991 Sister Raeleen was invited to be a member of the Golden Apple staff. She began her work with the Process for the Selection of the Scholars and of the Mentoring Program. The latter involved finding mentors (often Golden Apple fellows) to mentor the scholars during their college years. During these years she also observed scholars in the classroom and taught at DePaul Golden Apple summer institutes.

Sister Raeleen assumed the responsibility for the CORE (Center for Ongoing Renewal and Enrichment) program in 1997. By then the first scholars had completed their five-year teaching commitments, but they wanted to stay connected, gain further professional development and retain the camaraderie they had already established among themselves. Sister Raeleen developed this program each summer with the collaboration of fellows and scholars.

This past summer when Sister Raeleen retired from the CORE program, the Golden Apple Foundation honored her work with a plaque in St. Xavier University Chapel, site of CORE seminars, and in her honor planted a maple tree which overlooks a boulder embedded with another plaque inscribed, “For inspiring Golden Apple Scholars, Sister Raeleen Sweeney, PBVM, June 29, 2012.

After the 25th anniversary dinner, Sister Raeleen was introduced by Dominic Belmonte, current president and CEO of the Golden Apple Foundation for Excellence in Teaching. Dominic had observed Sister Raeleen’s teaching after she had been nominated for the Golden Apple Award. Of that experience he wrote in 1988: “This gentle woman must have some mighty soul.” His comment in his introduction at the anniversary was: “How true that sentence became for us.”

He adds: “Sister Raeleen has made Golden Apple stronger and more meaningful. All in this organization who love, respect and revere this woman do so because she has the most adhesive of souls. Her goodness made us want to do and be good. Her sense of justice helped us order ours and her gentle demeanor held more sway than any bellicosity could muster. We who know her are better because of that sticky soul of hers that insisted ours improve. She is proof that the spirit of God walks among us.”

Former and current scholars made such comments as: “Know that the kindness you invested in me continues to be paid forward daily;” and “Thank you for always being so thoughtful, so welcoming, so compassionate. You are truly remarkable;” and “I just hope I have been able to give back to some child just a piece of what you have given me.”

Sister Raeleen spoke after receiving the Lifetime Achievement Award, sharing some memories from her experiences with Golden Apple. It was a touching moment, however, when she held up a hand-made cross which “Carl” had made for her when she spent a couple of summers in the early 1980s volunteering at Handicap Village in Clear Lake, Iowa, where she served in a cottage with Carl and others. Carl had spent three weeks making the cross by hand, which deeply moved Sister Raeleen. “Daily I am reminded of Carl’s great love, and of how he is an angel in my life,” she comments.

Back in 1988 after Sister received the Golden Apple Award for Excellence in Teaching, she and the other recipients were invited to the Koldyke home for dinner, and she noticed a lovely sketching on their wall. Walking over to get a closer look, she noticed the sketching was familiar, and the conversation that ensued revealed that Carl was the son of Pat and Mike, the same Carl Koldyke who years before had made the wooden cross for Sister. Such graced moments are more than coincidences! To further the story, Mike Koldyke’s mother went by the name “Nanno!”

In her acceptance of the award, Sister also shared the story of Nano Nagle, Presentation foundress, “who taught children in Ireland under the unbelievable pressure of penal laws that forbid education to the Catholic poor. Through the Golden Apple, it has been my privilege to continue Nano Nagle’s passion for educating students and providing excellent teachers with attention to those most in need.”

It was evident that Sister Raeleen’s years of service to the Golden Apple Foundation have been productive and appreciated when so many young teachers came to greet her and thank her at the anniversary event that she never was able to eat her dinner! Clearly these people love her.

Sharing the joyful event were her guests: siblings, aunt and uncle, cousins, nieces, nephews, grand nieces and nephews, and several Sisters of the Presentation, all gathering from the states of Iowa, Illinois, Minnesota, Wisconsin and California. Paul Cichowski, who started this venture with his nomination of Sister Raeleen man