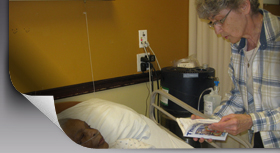 If you were elderly and loved Jesus, you would feel so privileged to have Sister Janet Stelken visiting you and bringing you Communion. And the people at Bronzville Park Care Center in Chicago, Illinois, do indeed recognize how privileged they are.

They seem in fact, to be God’s chosen ones, because Sister Janet has recently replaced Sister Barbara Rastatter who formerly ministered to the elderly of St. James Parish in Chicago. When Sister Barbara left there, she left big shoes to fill! The residents still ask about Sister Barbara, and their eyes light up when one can give them first-hand information about her. But they know that her replacement also ministers to them with the same love and care they knew before.

Janet Stelken was born in Farley, Iowa, the oldest of 11 children born to Emil and Marian Stelken. She grew up on a farm and thus has great appreciation for the gifts of nature and the value of hard work. After graduating from St. Joseph High School in 1963, she entered the Sisters of the Presentation. It was not a decision she had made lightly, but one which resulted from much consideration and prayer, prompted initially by an invitation from Sister Helen Marie Feeney.

Sister Janet graduated from Clarke College in 1968 with a major in biology and a minor in education. She began a 15-year career of teaching junior high science in Mason City, Sheldon, Algona, and at St. Columbkille in Dubuque, all in Iowa. She then taught in the religion department of Garrigan High School, also in Algona. Combined with that position was the responsibility of coordinating the confirmation program which included eligible students from both Garrigan and the public high school. Sister Janet met regularly with a team of parents and the parish priests to plan retreats, informational meetings, sponsor meetings, service opportunities for the youth in this program and all of the students of the five parishes involved were confirmed together in one ceremony. “I couldn’t have done all of that without the wonderful cooperation and help of all the parents and catechists who worked with me to accomplish this large venture,” remarks Sister Janet.

Through the intervening summers, Sister Janet earned her master’s degree in pastoral studies from Loyola University in Chicago, which prepared her well for all of her future ministries, each in varying ways.

Sister Janet accepted elections by the community to serve two terms in community leadership, which spanned from 1998 to 2008. During that time she was the leadership liaison to the senior sisters at the Presentation motherhouse, and she comments, “I hadn’t had a lot of experience with the senior population before that, so it gave me the opportunity to really appreciate older people.” Following her time in leadership, Sister Janet was invited to consider a completely new ministry: pastoral care for seniors at St. Therese Southwest in Hopkins, Minnesota. That further impressed upon her the many gifts the elderly have to offer.

After six years at St. Therese, Sister Janet was invited to participate in a community of Presentation Sisters which was being newly-formed in Chicago, and it happened that Sister Barbara left St. James at about that time; thus Sister Janet resumed the ministry so well established by her predecessor. Sister Janet is a naturally out-going person, so, after living alone in Hopkins, she now observes, “I so appreciate living in community again.” And it is easy to tell that she is an essential part of the lives of Sister Marilyn Breen, Sister Jessi Beck and Candidate Mary Therese Krueger.

Sister Janet visits the elderly in their homes, care centers and retirement homes. She prays with the seniors and brings them Communion. She is touched by the spirituality, particularly of the elderly in the Black culture who so treasure receiving Communion. As soon as she comes in the door, many of them will ask, “Did you bring Communion?” Sister Janet says that, in spite of their infirmities or difficulties, they will always proclaim, “I am so blessed!” And, observes Sister Janet, “They truly mean that with their whole heart. They are always most welcoming, so they really live the hospitality of Jesus whom they receive.”

To observe Sister Janet pray and visit with these seniors is to see a woman who herself is a person of prayer, and whose gentle and caring nature makes each senior believe that s/he is the most important person in the world at that moment.

There are long years between the high school dances in Farley, the years of teaching science and religion, of ministering to the Presentation community and the privilege of appreciating the elderly in a new way. But they are years which Sister Janet has weathered well and which, if anything, have made her even more attuned to people of all ages and cultures. No wonder people worriedly say, “I was afraid you weren’t coming” if she is even a little bit later than usual for her visits. And then, comfortable in her presence, they settle back in bed to have a visit with this imitator of Presentation Foundress, Nano Nagle, who walked the streets at night to visit the elderly confined to their garrets in Cork, Ireland. Sister Janet truly is an example of going “one pace beyond.”

Left Photo: While visiting the elderly at the Bronzville Park Care Center, Sister Janet Stelken enjoys a laugh with a resident.

Right Photo: Sister Janet Stelken prays with a resident at a care center.