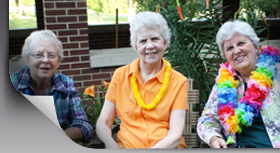 A Heart for the Poor

Retirement? What on earth is that? This is a question Sister Sheila Ann Dougherty might legitimately ask after a few years of "retirement" and still being as busy as ever.

Sister Sheila Ann was born the daughter of Everett and Mayme Dougherty in Mason City, Iowa. The younger of two daughters, she and her sister, Mary Ellen, both attended Holy Family Grade and High School in Mason City before beginning their life careers.

Sheila knew from the time she was in third grade that she wanted to be a religious sister, a fact that made her parents very happy, and they were both encouraging in her desire. They prayed every day for their daughters, and they made their faith a very significant part of the lives of their family.

True to her declaration, Sheila entered the Sisters of the Presentation after graduation from high school. After receiving her bachelor’s degree in music from Clarke College in Dubuque, Sister Sheila Ann began teaching music, a career whose schedule automatically leaves very little personal time for the teacher. Sister began teaching in Monona, Iowa, then moved on to Osage and Algona, Iowa, and eventually on to Monticello, Minnesota.

After some time, Sister Sheila Ann returned to Dubuque where she taught music at Resurrection School for one year, then moved on to Wahlert High School where she taught instrumental music. While at Wahlert, she also went to grade schools in the city to teach instruments and to form small bands. For all of this work she was equipped by having played the saxophone since sixth grade, and having been in a band herself all through high school.

Subsequently she spent eight years in congregational leadership for the Sisters of the Presentation. She then taught in Whittemore, Iowa, after which she became liturgy director for St. Joseph Parish in Dubuque. Sister Sheila Ann was also responsible for the RCIA Program, and for visiting parishioners in the hospitals. Eventually Sister Sheila Ann moved to Oak Lawn, Illinois, where she served as a pastoral associate at St. Germaine Parish. In that role, she formed small groups to discuss religious topics, formed a spiritual growth team which helped with formative activities and marriage enrichment offerings. Sister also began the practice of Taize prayer in the parish. In the meantime she received a certificate in spiritual direction in Colorado Springs, Colorado.

Returning to Iowa, Sister went to St. Jude Parish in Cedar Rapids, where she was the music director, which included planning for weddings and the liturgical decor of the church. With the amount of work involved in parish life, Sister knew it was finally time for retirement at Mount Loretto motherhouse.

During her first year of retirement, she and Sister Joan Lickteig spent considerable time revising the "Liturgy of the Hours" booklet, the form of the Divine Office which the sisters pray every day.

Sister Sheila Ann’s father was a veteran of World War I, from which he suffered a life-time disability, in addition to problems with asthma. Watching him in this condition as she grew up, she developed a heart for those veterans who left the war with physical needs. Acting on that passion, Sister arranged to spend time at Captain James A. Lovell Federal Health Care Center in North Chicago, sharing her talents for the joy of the veterans who were permanent residents there. Spending about six hours a day at the hospital, she entertained them with her piano and music skills, and visited long-term patients. She formed small singing groups, and she would go to different floors and just play the piano during lunch hour. She also played for an hour at the entrance of the hospital, so that visitors, especially veterans’ family members, were greeted with the joy of music as they began, what was probably for many, a difficult visit with their loved one.

Sister Sheila Ann comments, "I have been very happy at Mount Loretto. I have kept up with the veterans, going about every three months to continue work with them in Chicago. And music is invigorating for me, so I take some time to play the piano every day." She also plays for liturgies at Mount Loretto on a rotating basis, and during her first two years of retirement she played for liturgies at Holy Spirit Pastorate in Dubuque.

Additionally, Sister Sheila Ann has a passion for the poor and less fortunate. She learned this early in life when her parents took the girls to wakes and funerals, and when members of the Sodality made favors for people in nursing homes. "The poor have a strong place in my heart," comments Sister Sheila Ann, "and I want to help the poor as long as I can. I want to see that not one more person falls through the cracks. We never had a lot of money growing up, but we made it work. For years my mother directed a camp for handicapped children in the summer and we would play our instruments for them. I learned that there were people worse off than we were, so we needed to help them."

Sister truly lives those words. Even today she volunteers to serve meals to the homeless once a month at the Dubuque Rescue Mission, and helps at the local food pantry to package food for the poor. She has also worked at St. John Lutheran Church’s homeless center, registering the homeless who seek shelter.

Her latest venture has been to become part of a group on human trafficking, studying the problem especially as it exists in the Dubuque area, giving presentations and working with a coalition of other women religious to raise awareness of this major problem which takes advantage of various kinds of poor.

Now it is easy to see why Sister Sheila Ann doesn’t know the meaning of the word "retirement," or perhaps it is just that her heart is so bent toward the poor that she cannot rest easy while they are in her midst.