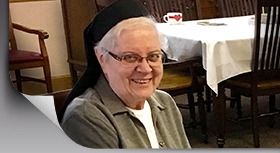 If you were the older sister of two brothers, staying above their antics would fully qualify you to be a successful teacher and manager of a classroom, as well as of a whole school! So it is no surprise that Sister Mary Louise Scieszinski has done both with great success! Maybe that part about her brothers is a little exaggerated, but there is no doubt about the quality of Sister Louise’s life work. And she loves her brothers, so maybe she reformed them along the way as well!

Mary Louise, daughter of Mary and Pat Scieszinski, originally lived in Dougherty, Iowa, where the Sisters of the Presentation taught Mary Lou and her two brothers, Joe and Jim. There were two more girls in the family, both of whom died at birth. Such a loss to a family is bound to strengthen both parents and children as they learn to adjust to life without two other children. And indeed, God imparted to this family a strong faith and sense of dependence on God, and it is that faith, nurtured in a small rural parish, which keeps them a close family today even after the loss of both parents. What Mary and Pat instilled in their children remains evident in their love and respect for each other, and in their continued efforts to be faithful to their God.

“My parents often said, ‘Always do what you can do for somebody else in a quiet, respectful way,’” states Sister Louise. “Faith was never ‘do’ and ‘don’t’ but it was a way to live and it motivates everything, colors your life. We never had much, but there was always enough to share. And every night in October and May and during Lent we prayed the rosary after supper.”

It is easy to see how this lived faith was instrumental in her choice, at the tender age of 16, to become a Sister of the Presentation. In addition to her family life, she was greatly influenced by the sisters who lived in her parish and taught her. “I could see how they lived community in a happy way, and they were a real inspiration to me.”

Entering the convent, Sister Louise continued her education, graduating from St. Columbkille High School, and then from Clarke College (both in Dubuque) with a major in French. Sister Louise began her teaching career in fourth grade at St. Columbkille School. After eight years of teaching there and a year of study, she became the principal of the school for the next seven years. Respected for her expertise in both roles, she was invited to become the curriculum director for the Archdiocese of Dubuque, a position which called forth still more talents for the next seven years. But she was not yet finished! In 1981 Sister Louise was asked to become part of the formation team for the Sisters of the Presentation. As a principal Sister Louise believed her role was to encourage young students to become the best person each could become, and formation work was not terribly different. This role enabled her to teach sisters in formation to put forth their best efforts at becoming what God had called them to be. Her own faith and spirituality set forth a pattern for them to observe and to apply to their own lives as appropriate for each individual.

After five years in formation work, Sister Louise became the principal of St. Patrick School in Cedar Falls, Iowa, where she spent the next 13 years. From there she went to St. Mary School in Humboldt, Iowa, where again she served as principal. Even after she retired, Sister Louise served as an aide at Resurrection School in Dubuque for the next five years. She also mentored new principals for the Sioux City diocese for a year and gave teacher workshops in various schools for several years.

In the summers along the way, Sister Louise pursued graduate work in French at Middlebury College in Vermont. She used her acquired language to teach French from first grade through ninth. Still another challenge came when she was accepted into a fellowship program through which she acquired a master’s degree in education with a specialty in reading, again from Clarke College.

It’s not hard to understand how Sister Louise could spend all these years in the schools: she loved teaching! And even the years in administration were focused on helping every faculty member and aide to become better at the profession. “I loved teaching,” states Sister Louise. “I loved watching the minds of the students expand. And I loved working with parents. Being a principal was just a way to help teachers make everything go well for the students.”

“My mother had taught in a country school, and I remember how happy she always was. She would always say, ‘Every day I saw the children learn and grow.’ It wasn’t easy for her to become a teacher. Mom had a two-year degree from Ottumwa Heights College, and she contracted with the college that half her salary would go to pay her college debt. When she started teaching, she earned $40 a month, out of which she paid $20 to the college for her debt. And she cleared her debt!” What an example to have for life!

Given a very active 51 years in education ministry, it would be no surprise to learn that Sister Louise loves retirement “because of the lack of schedule and stress.” Still, she makes good use of her time, enjoying reading, sewing, crocheting, playing and listening to music, cooking, baking and things that were “scheduled” in her former life. Recently she finished crocheting several warm neck scarves to give to men who are homeless. Sister Louise also assists Sister Barbara Rastatter with therapy practice several times a week.

It is easy to see how her early life shaped Sister Louise’s professional life. Her faith was her mainstay, and she remembered the words of her parents: “Faith motivates everything. Always do what you can for somebody else in a quiet, respectful way.” And that is what Mary Lou Scieszinski has always done!