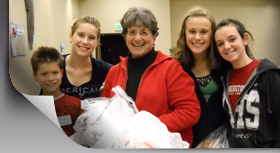 A “Conduit” in Action

Nano Nagle once said, “If I could be of service in saving souls in any part of the globe, I would willingly do all in my power.” Nano herself never traveled outside of Ireland for ministry, but today she is alive and well through her daughters who minister all over the world. When Nano made that comment, she might well have been thinking of going to the obviously needy places in the world, such as India. But today she is well represented in the second largest city in Iowa by a Presentation sister who ministers daily to those made poor. And this is a ministry of evangelization, of “saving souls” by loving them as Christ would.

After years of serving as a music teacher, and then as a liturgy and music director, Sister Joellen Price hungered to conclude her active ministry years by serving those made poor. So she moved to St. Pius X Church in Cedar Rapids, Iowa, in 2007 to coordinate efforts for social justice and pastoral care. Never doubt the wisdom of the Spirit. Barely having time to have learned the names of the parishioners, Sister Joellen was faced with more need for outreach and pastoral care than she would ever have dreamed when she first came to the parish, because in 2008 the Great Flood hit Cedar Rapids, and life has not been the same there since.

Both of Sister Joellen’s parents had been in the accounting business, so she learned very young about finances. “I knew how to budget a nickel,” she comments. Being the oldest of the four children of George and Irene (Jarosh) Price, she also learned quickly about organization and leadership. Additionally, she had earlier been the coordinator of the Presentation motherhouse, a position which required both organization and financial awareness.

Thus, as Cedar Rapids began to take in the terrible damage, loss and personal sadness caused by this disaster, there was great need for finding financial assistance, for organization, and, most of all, for a heart that could understand what had shaken this city. It had to have been the Spirit who had called Sister Joellen to Cedar Rapids the year before.

Sister Joellen calls herself a “conduit.” She channels resources and volunteers to the people and areas in need. Shortly after the flood, the first need was to get houses cleaned out and gutted so that next steps could be taken. “When visiting one house in my sandals, I realized immediately that this was not safe – for anyone,” says Sister Joellen. “So I immediately sought donations of boots and gloves and other items which would enable the workers to be safe.”

As she drives through the city, Sister Joellen points out places where whole neighborhoods have disappeared. After the houses were gutted, people couldn’t get insurance to re-structure them because they were in the 100-year flood plains so they had to go elsewhere. Consequently, the city, of necessity, tore down these homes.

Initially the 11 Catholic parishes in Cedar Rapids “divided up” the assistance to be offered, and St. Pius X became responsible for distributing food, while other parishes distributed clothing and other items of need. As the collection and distribution of food became too much for one parish, Sister Joellen and Sister Linda Bechen, RSM, who was in another parish in the city, collaborated and gradually began something new for all the parishes to support.

“It is called the ‘Metro Catholic Outreach,’ (MCO) and it is located on the first floor and basement of the Sister Mary Lawrence Community Center, built by the Mercy Sisters,” states Sister Joellen. “Part of the first floor and part of the second floor are occupied by charitable ventures, such as Catholic Charities; Gems of Hope, which makes jewelry for cancer patients; and a law center for children whose parents have divorced.”

As they began this venture, Sisters Joellen and Linda spoke to several groups in the city parishes, and they always took with them a picture of Nano Nagle, and a picture of Catherine McCauley (who founded the Mercy sisters after making her novitiate with the Presentation sisters in Ireland). They told their audiences that they were standing on the shoulders of their foundresses, these holy women who spent their lives in service of the poor.

Sister Joellen organized volunteers to make a survey of the city, to see what places were offering which services, so that they would not duplicate what others were doing. That list is now available at MCO, so that the volunteers who work there can refer people with needs to those centers. “MCO is a food pantry, with some limited emergency financial assistance available for rent and utility needs, staffed by one paid executive coordinator, Barbara Kane, and many volunteers whom Barb organizes,” says Sister Joellen. Businesses donated office furniture, computers…everything that was needed to set up the facility. Sister Joellen also coordinated the writing of grants for other needs at MCO.

Barbara speaks with passion about MCO; her heart and soul are truly with the people who come there and with the necessity of keeping the outreach going. They have a highly-organized schedule of volunteers to obtain and distribute the food. The public school children also bring food for MCO, and every parish contributes to the center. Barbara claims that Sister Joellen “works harder than any person I know. She is everywhere, doing what needs to be done.”

But more significant, even, than the founding of this center is the heart with which Sister Joellen works. Luz Espinosa shared the story of a driver hitting her house in the middle of the night, causing serious damage to her home. The driver had no insurance, and Luz was terrified that she would lose her job, having to spend time getting her life and family back together. She describes Sister Joellen as “an angel who truly saved my life. I was so scared, I felt lost, hopeless, mentally and spiritually devastated. Sister Joellen brought relief, peace, comfort, happiness to my children, food at Christmas. There was no end to what she did for us. I tried very hard to get myself back to my regular routine so that I wouldn’t have to ask for so much help.” Luz helps in the food pantry whenever she can.

It is impossible to adequately convey the loss suffered by the people, and the hope they have gained through the efforts of Sister Joellen inviting the other parishes to collaborate in this outreach.  One has to experience it to appreciate the vision, the largeness of the effort, the gratitude of the people and the efficient leadership of Sister Joellen.

Sister Joellen has a bachelor’s degree in piano and music education from Clarke College, a master’s degree from Notre Dame in liturgical studies and is a certified spiritual director. The latter has been invaluable as she listens to people in need and seeks to give them hope and deepened faith, as well as food for the table.  She also serves as a spiritual director for persons in Lay Ministry Formation and other persons in the area who seek this service.

Nano Nagle must smile at the Holy Spirit who guided Sister Joellen to Cedar Rapids just in time to be of unimagined service, and Nano must beam with pride as she sees one of her daughters serving with joy and humility, saving souls by offering both spiritual and physical food.