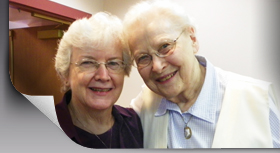 When Valentine’s Day and Mardi Gras fall in the same week, Sister Pierre Kollasch will be there to join in the festivities. When a game of Rap Rummy or Three-deck Euchre is scheduled on Sunday, Wednesday or Friday, she will be there ready for a fun evening. And, Sister will gladly enjoy a good movie on closed circuit television or a “floor party” with sisters in community.

“When I chose to ‘slow down’ this past year, I began to wonder what I would do,” comments Sister Pierre. Until recent months, Sister Pierre has been serving as the “sweets sister” in the Mount Loretto food service department. For her the tantalizing call to relaxation and quiet, extended prayer and reading, and other amenities in community prayer and service, has definitely been a rewarding experience that she has lived joyfully.

While Sister Pierre’s journey to retirement has had shifts and curves, so, too, did her journey to entering the Presentation community. “In grade school, I loved saving my coins to support missionaries who would bring baptism to ‘pagan babies,’ but I wasn’t keen on going to a foreign country to help out,” recalls Sister Pierre. “When I thought about becoming a sister, I didn’t necessarily consider being a teacher like my cousins Sisters Mary Denise, Ann Marie Kollasch and Presentation Dalhauser. With the example before me of my aunt Sister Mary Matilda Kollasch who had cooked for the sisters in Whittemore before entering, I wanted to be a ‘cooking sister.’ Somehow, I wanted to help the sisters who served in domestic roles to become more connected to the rest of the community.”

But Sister Pierre’s journey did not take her to the kitchen at first. After teaching kindergarten through third grade for 35 years, Sister responded to a call to join the team of sisters serving retired priests at the Villa Raphael – then located in the former Presentation motherhouse at 1229 Mount Loretta Avenue in Dubuque. Eventually she became the coordinator of personal care at the Villa serving a total of 15 years.

“Following that I teamed with Sister Gertrude Schmelzer in the Mount Loretto bakery of our present motherhouse,” states Sister Pierre. With this new ministry, she came full circle to an earlier ministry dream. Sister brought out her own recipes for delicious cookies, bars and other delectable treats for the community. In time, she became the head baker at Mount Loretto. “I really enjoyed doing this and felt very connected to the sisters who went before me – remembering especially Sisters Mary Modesta, Matilda, Alphonsus, Raphael and Carmelita.”

There are many recipes in Sister Pierre’s file: Never-Fail Jellyroll, Potato Chip Cookies, Santa’s Special Squares, Diet Applesauce Cookies, Self-Filling Cupcakes, Butterscotch Cheesecake Bars, Peanut Butter M&M Cookies. Take any of these, mix them with dedicated service and loving care over 60-plus years of religious life and the result is hospitality in the spirit of Nano Nagle embodied in Sister Pierre Kollasch.