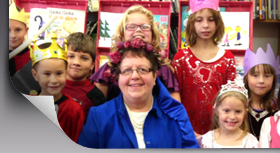 If you see a group of sisters visiting and laughing, you will probably find Sister Marilou Irons in their midst, because she is a great storyteller. She will be the one with the wide smile and the sparkling eyes.

“Eye has not seen … what God has ready for those who love him.” This Scripture quote is one of Sister Marilou’s favorite, because it expresses God’s unfathomable love. And her life, given over to God at baptism, has been full of signs of God’s love for her, a love which she first experienced from her parents. Sister Marilou is the fourth of nine children of Bob and Catherine Irons of Waukon, Iowa. She speaks with great joy about her family and the life lessons she learned in its midst. “My parents provided me with a great childhood,” she states with pride. “My mother was an organizer and an optimist, who always said,  You can do this!’ My dad would always caution: ‘Life is too short for anger. Get it out of your system!’ And they never made comparisons among their children: each one of us was respected as unique and wonderful. From my mother I also learned to have a grateful heart, to thank people by writing notes that share my thoughts and appreciation.”

Sister Marilou had early experience in working “with a group,” because her mother would organize the children into teams to do their household chores. Through this, she learned to work with young children. At one point in her teenage years, she and her sister calculated that between the two of them they had babysat 250 children in and around Waukon. All of these experiences were invaluable when Sister Marilou spent 30 years in administration of schools, after having taught for several years in Catholic schools. She first taught at Resurrection School and then St. Columbkille, both in Dubuque. She also taught in Osage and Mason City, both in Iowa. Sister Marilou was a principal in the Farley-Bankston school system, in Manchester, and in Cedar Falls, all in Iowa. She served as the principal, director of religious education, and confirmation coordinator at Sacred Heart in Oelwein, Iowa, where she also obtained certification for the school to provide day care and preschool programs. Sister retired from school work after being the principal in Webster City, Iowa.

Sister Marilou became convinced at a young age that if she wanted to go to heaven, she needed “a group!” She knew in second grade that she wanted to be a sister, so after graduating from St. Patrick High School in Waukon, Marilou entered the Sisters of the Presentation. She completed her college work at Clarke College in Dubuque, and later received a master’s degree in reading with an emphasis in administration from Clarke. Sister stated that she was fortunate because she always had good people to work with and great communities of sisters in which she lived, thus confirming her early belief that being in a “group” does facilitate the journey to heaven.

Currently Sister Marilou is serving as the resident manager of Applewood I and II in Dubuque, an independent living residence for seniors. Sister provides hospitality and a sense of “home” to residents in 90 apartments. In addition to general management and housekeeping of the buildings, she plans group social activities and obtains speakers on various topics.

“Being a part of the Applewood community is similar to my years of being a part of a school faculty as there are many aspects of both that involve building community and enjoying life,” states Sister Marilou. “As a coordinator of hospitality, I am blessed to team with great folks.”

In her leadership activities through the years, Sister Marilou liked to pilot new ideas, although she would always “mull things over,” looking for all the ramifications and getting input. She thinks variety is important and has implemented that in her various positions. One of her passions is history. She loves to read about it, see movies about it and talk about it! She also likes to walk, ride her bike and fish. And she loves visiting with people! That “group” idea will most certainly get her to heaven!