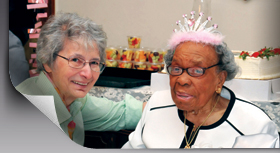 Nestled comfortably among the hills in Northeast Iowa is a small village named Harpers Ferry, where the “Cota” name is well-known and respected. Bill and Marie Cota raised their nine children on the farm, and when, after several years, they moved to town, Bill remained active in the village, serving in several civil positions and other roles while his newly-married son and wife took over the farm.

Mary Lou is their second youngest child. Often as she was growing up she thought about becoming a religious sister. That would not be unusual, since Mary Lou had several first cousins who were priests and sisters in various religious communities, and her own parents provided a faith-filled family environment. On Saturdays, the Sisters of the Presentation came to teach religion to the children of the parish, so Mary Lou had first-hand experience with the Presentation community.

In the fall after her high school graduation, she traveled to Cedar Rapids, Iowa, to begin nurses’ training at Mercy. After a week she came home for a visit, and it happened that her pastor, Father William Leonard, stopped in for breakfast, something he very rarely did. The Holy Spirit was at work! After their meal, Mary Lou told Father William she had been thinking about religious life. He encouraged her, and then he took her to Waukon, Iowa, to see the sisters there. After visiting with them, it became clear to Mary Lou that this was indeed what she wanted to do with her life.

So, without further ado, on the following Wednesday she went to Dubuque to enter the community of the Sisters of the Presentation. After completing all the necessary entrance “process” that day, she was taken out to the garden to meet her classmates, who had spent the day working in the “Ground Cherry Patch.” Throughout their lives together they have never let Sister Lou forget that she was one week late for that onerous task! Switching from nurse’s training to college, Sister Lou earned a bachelor’s degree in interdepartmental science from Clarke College. Subsequently she earned a master’s degree in biology at St. Mary College in Winona, Minnesota.

Over the years she taught in schools in Ryan, Lawler, Farley and Dubuque (St. Columbkille), all in Iowa, and at St. Dorothy School and Augustus Tolton Catholic Academy, both in Chicago. In these schools she taught high school general science, physics and biology and grades fifth through eighth science.

But a new field had been emerging! Sister Lou took her first computer class while teaching at Farley, and continued taking computer classes and workshops during the summers. While at St. Dorothy, computer technology became prominent, and Sister Lou began teaching computer part-time to grades five through eight. It was not long before that position became full-time in pre-K through eighth grades!

Augustus Tolton was formed from the merger of St. Dorothy and St. Columbanus schools, both in South Chicago. The press release at the merger stated, “The Academy serves largely African- American students who are held to high academic standards, and the academic excellence of St. Columbanus and St. Dorothy schools will be a foundation for the Tolton Academy. Tolton is the first school in the Archdiocese of Chicago to implement a STREAM curriculum, which places a focus on science, technology, religion, engineering, arts and math.”

Sister Lou became immersed in the richness of other cultures in various ways. At one early point she attended a workshop by C.T. Vivian on interracial justice, and that raised considerable awareness within her. She was also a Presentation representative on the Intercongregational Committee for Justice, where racism was often discussed.

Many years ago the Presentation Sisters established a “Kairos” program through which sisters and lay volunteers spent time in the summer ministering among other cultures. Sister Lou spent three summers in Tennessee with that program. One part of their efforts was to encourage the rural mountain people to bring their children to the city schools. They also took a census for all the parishes of varying faiths to figure out what the people needed. They gave the people directions to get from their home to a parish church where they could come for help. A Kairos team had also served at St. Dorothy, and this was Sister Lou’s first experience of working in an African-American community.

It was also through teaching at St. Dorothy and Tolton, and through her life in the Chicago parishes where Sister Lou experienced the richness of other cultures. St. Dorothy, where Sister Lou began in 1983, was a largely African-American parish, and St. Gerard Majella in Markham, where Sister Lou has lived since 1993, has become a largely Hispanic parish. Additionally, when sisters from other countries gave mission talks in the area, they would stay with her and their conversations always enriched Sister Lou’s life.

Chicago is a city that places great emphasis on unity among the people living in a particular block. At St. Dorothy, they had frequent social “block” parties and also block meetings for civic responsibilities. Members on a given block looked out for each other and became close. Through these associations, Sister Lou came to know and deeply appreciate how important “family” is in the Black culture, and extended family is especially valued. “It takes the whole neighborhood to raise a child” was a reality that was made visible.

Markham is multi-ethnic, and Sister Lou says, “Markham is very ‘homey,’ which creates a strong sense of belonging. This keeps me aware of how important it is to work for respect for all people and for the varying community cultures. I am grateful to have experienced such multi-ethnic cultures in my life. ”

“Retirement” may be a misnomer for the life Sister Lou currently lives. She visits shut-ins at St. Dorothy and St. Gerard parishes, and participates in liturgies and activities at both parishes. In every Chicago parish there is one person responsible for keeping the records and sending in reports to the Office for the Protection of Children and Youth. Sister Lou is that person at St. Dorothy. To better help herself with the culture of the people, she is learning Spanish, the language of many of the St. Gerard Majella Parish where she lives.

Sister Lou believes that “One cannot be Christian without accepting one another. We are more alike than different. There are so many wonderful things in other cultures, and it is exciting to see the beauty in these cultures. If we are open to it, we cannot help but be enriched. It is also very important to grow in the awareness of the ways in which we discriminate against others. Our speech and actions always need to show respect and to demonstrate that we are all equally God’s children.”

When Mary Lou Cota was a little girl in the village of Harpers Ferry, who would ever have dreamed who she would become or the richness her life would hold by her embrace of so many people who were “not from Harpers Ferry!”

Right photo:A celebration with family and friends was held to celebrate Virgina Coffey's 103rd birthday. Virgina was one of the homebound Sister Lou Cota visits on a regular basis. Virginia passed away this past October. Sister Lou spends time with Gwen Currin (second on left), another special elder from the parish. (Photo credit: John Weeler)