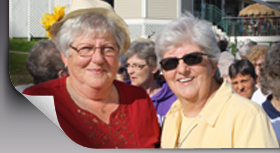 Born in Manchester, Iowa, the oldest of nine children, Sister Sharon Kelchen feels fortunate to have enjoyed the mix of nature because, living on a farm, the family lived off the land, worked and played hard.

Sister Sharon also feels blessed to have had Presentation sisters teaching her in Ryan, Iowa, especially for the opportunity to experience the gift of music with piano lessons. “All through school they provided those wonderful practice rooms where I could learn how to express my inner self, and grow to know those wonderful women of my early years who let me into their somewhat cloistered home but open hearts,” comments Sister Sharon.

It was little wonder, then, that Sister Sharon entered the Presentation community after graduation from high school in 1964, answering a “call” which she could not have explained then, but which she responded to because “I wanted to be like them and help others have a part of my experience.” Most graduates of that day became nurses or secretaries, and Sister Sharon found moving away from the “norm” a bit challenging, but she was sustained by the friendship.

After completing her college, Sister Sharon taught music in Farley, Mason City, Algona, Sheldon and Key West, and subsequently became the principal in Farley and Storm Lake, all in Iowa. As principal, she began the “Rainbow Circle Preschool,” which still exists today, although it has now moved to its new location in Peosta, Iowa. This effort was truly a labor of love for Sister Sharon and the parishioners who helped her take siding down from walls, refurbish the rooms and do all the manual labor required to turn a part of the school into two rooms for the youngest parishioners.

Sister Sharon recalls, “After those years we were more free to choose how to use our gifts and longings, to bring hope to thirsty people and lands, to trust who we were. So when an opportunity arose to minister at Our Lady of Guadalupe Parish in Chicago, Illinois, I was welcomed among the Hispanics, and I learned of the inner city.” A new world indeed from her years on the farm in Ryan. “I never believed I could work among people of another culture because of the language barrier, but I did, because we simply related to each other.”

And perhaps that speaks volumes about Sister Sharon as a person: she simply relates. She makes everyone feel comfortable, regardless of age, background or any other differences. Thus it was that she could engage in several varied ministries over these years, and could feel comfortable in each of them because she “simply relates.”

“My favorite Scripture quote is from John’s Gospel: ‘I have come to bring you life and to give it abundantly.’ For me, this has meant trying to have as many experiences as possible according to my gifts. Life seems to produce new growth, and I find myself with new energy every so many years. In between the stops I tuck in the teaching of piano now and I hope to do more in the arts for the future. Maybe to be surprised with the pieces of beauty that are still awakening as the connections continue,” muses Sister.

One of those “stops” was working as the house coordinator at Mount Loretto for 10 years. The community had purchased the former Mount St. Bernard Seminary, and after living in it for a while, they found it necessary to undertake a massive remodeling. Sister Sharon found this “a bigger challenge than the language barrier of Guadalupe. People had to live and work in the space where remodeling was actually taking place. I learned other gifts of responsiveness and aliveness to help make a new building a home. The older sisters were accepting and energetic for the new. They were the mainstay of a huge co-operative working situation. Those years also gave me the opportunity to work in Maria House, a home for women and children in Dubuque.”

Now Sister Sharon has been warmly welcomed back into Farley for the third time, this time to be a Minister of Care in St. Joseph Parish there, now part of a cluster. “This ministry takes me to hospitals and nursing homes, to those who live alone, and to the sick and dying. As we companion each other, moments are rich with the memories of years, with seeing how their families regard them as the center of their lives, and to take in the incredible acceptance of all the losses that take place as we grow older. Truly I can experience the fullness of life; John’s words on how to grow in the abundance of life never cease as life is lived in a newer, quieter way. Life isn’t so much an interruption to my schedule and plans, rather, the present moment is quality, no matter whether we are playing cards, praying, listening to each other or answering the Question of the Day: ‘What’s new in Farley?’” smiles Sister Sharon.

The hard part of this ministry is saying ‘good-bye’ to so many who die suddenly, or of sickness, or from length of years. “I am only beginning to learn from the strength and value of weakness. Like an old tree that was useless to many because it was gnarled, but, allowed to grow in the shade for years and years, it grew tall and beautiful. Being useful would have meant being cut down and made into tables and chairs. Those with whom I have journeyed continue to send their love and spirit to me. I need them to help me live my life, to teach me where I am going and to whom I belong.”

Sister Sharon reflects on the importance of the Presentation charism. “Hospitality is key to being open to the present moment that goes by only too quickly. As one person stated, ‘How do we learn to melt into God and take the ordinary into the fullness of God?’ Maybe it is the abundance of which John speaks. Our connectedness to people, places and the development of ourselves goes full circle. The folks of every day and the shared moments of every day take me into the future that cannot necessarily be planned out, but that allows us to embrace a greater mystery built on the spirit of today,” states Sister Sharon.

In a sense, Sister Sharon has now returned to her roots, living in a rural community, caring for others as the sisters of long ago cared for her, ministering now to the grandparents of children whom she had previously taught in Farley and even teaching piano lessons as she herself had long ago been taught. The years between have been rich ones for Sister Sharon, because she “simply related,” both to God and to the people with whom she journeyed. The Presentation sisters are blessed for their work of years ago in “being hospitable” to this young girl who wanted to model her life after them.

Right Photo: Sister Sharon Kelchen (right) visits Richie Kluesner in his home and blesses him with ashes as he prepares for the begining of Lent.