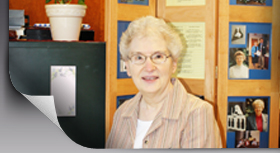 Rooted in Family and Faith

Trust that is so foundational to Sister Hermann’s life was carefully incubated in her childhood home shared with parents, Joseph and Elizabeth, and nine siblings in Algona, Iowa. When Sister Hermann was only five weeks old, the family was shaken by the death of their husband/father. The strength and nurturing of their mother sustained the family. A phrase used frequently by her mother attested to her great faith in God, “The Almighty will take care of us.” Like mother…like daughter.

Sister Hermann graduated from St. Cecelia Academy in Algona in 1956 and that fall began her life as a Presentation sister. As she came to know the heart and soul of the community and its foundress, Nano Nagle, she would likewise dedicate herself to the education of children. She completed her education by earning a bachelor’s degree in English at Clarke College in Dubuque, Iowa, and a master’s degree in Library Science from Rosary College in River Forest, Illinois. With  his academic background, she ministered for 49 years in positions as junior high teacher, principal, archdiocesan educational associate, curriculum director, religion coordinator and librarian in Osage, Storm Lake, Dubuque, Whittemore and Algona, all in Iowa, and Oak Lawn, Illinois.

Her eyes sparkle as she summarizes her teaching experience, “I had so much fun with my students…even when they connected my name to ‘Herman’s Hermits,’ an English pop band formed in 1963.” Recalling another classroom delight, she refers to a seventh-grade student who responded to her English assignment to compose a request to visit a local business. This clever young gentleman crafted his letter to a local bank and included the details that he would like to visit at midnight and that he would bring sufficient dynamite to make it a “successful” endeavor. “And the best part of this story is that I had to give him an ‘A’ on the assignment because it was so well-written.”

Sister Hermann cherishes the interaction that she has had with parents and teachers over the years. “I was so inspired by parents at conference time because they were truly interested in both the academic and spiritual growth of their children.” She continues, “Teachers were so motivated to share their understanding of the Catholic faith with students and with their own children.” Like foundress Nano Nagle…like daughter of Nano Nagle.

Sister Hermann now begins a new adventure as archivist for the Presentation community. “This will be a new way to use my organizational skills for the benefit of the community. It is a privilege to be entrusted with keeping the community history and documents.” She is now under the able tutelage of Sister Marian Sweeney who has served in this capacity for the past 11 years.