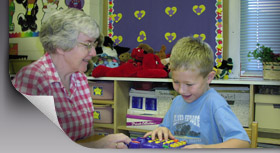 Some are born to tell stories; all are born to live them. Sister Suzanne Gallagher’s ministry bears the mark of a natural storyteller being led by the divine Storyteller. This story of her ministry begins in November 1994 when Sister Suzanne made a spontaneous passing comment to the pastor of St. Mary Catholic Church in Guttenberg, Iowa. “If you’re ever looking for a principal, let me know,” she said.

Four months later, she was on her way to St. Mary-Immaculate Conception School in Guttenberg. It was as though God typed the words that spilled from her mouth on that stairwell, setting the plot for the next 16 years of her life.

“Not that long ago, St. Mary School was in serious need,” Beth Sadewasser, leader of the Alumni Committee, said as she honored Sister Suzanne with the naming of a new playground and auditorium at the St. Mary Alumni Banquet on June 7. “But God sees our needs, hears our prayers, and answers those prayers through the service of other people. In 1995 God answered our prayers with a gift. God gave us Sister Suzanne.”

Like every good storyteller, Sister Suzanne has the gift of imagination. With a spirit of hope, she saw opportunity rather than obstacle in the condemned 1894 junior high auditorium.  With fearless trust, she diligently worked to raise $100,000 in donations, volunteer labor and donated materials – not only saving the arts, but making improvements all over the school.

For every need, she found a solution. From science to the arts, a new auditorium to new playground equipment, Sister Suzanne left her mark on the story of St. Mary’s restoration.

“Every child is a gift, every child is gifted,” Sister Suzanne would often say. With this belief, Sister rebuilt the curriculum to fit her teaching philosophy that there are many ways to learn. She restored the music and arts programs, believing “it is so important for the inner life of a child to have art and music.”

“Sister understood the value of the arts. She would not allow this fundamental aspect of a child’s educational development to be sacrificed. While other schools’ art programs slowly declined, St. Mary’s rapidly expanded,” said Beth.

Sister Suzanne expanded her impact beyond the school. With more than $200,000 in grants, she turned the Family Resource Center over to the local hospital to assist women and children in the midst of “the silent epidemic of domestic assault.” Today, the Family Resource Center is served by 16 agencies providing resources from home heating assistance to parenting classes.

How did one woman accomplish so much? Only with the grace of God, the Author of her story. “I could not have made it without my faith,” reflects Sister Suzanne. “Whatever I needed and asked for, I received. Whenever there was something really difficult, I would ask God for a sign that I was doing what was best for the school and the children. While I was in that area, my sign was the cardinal – it just always appeared.”

The fruits of her faithful trust are fittingly marked with a sign of her own: the new playground and auditorium now bear the name Gallagher.

“I feel so proud to be who I am as a person and Presentation Sister, and I am affirmed that I did make an impact,” Sister Suzanne said in response to the honor.

Sister has continued to make an impact since her time at St. Mary’s. Each day she visits nursing home residents living with dementia. She also ministers to her family by faithfully finishing the storytelling genealogy work begun by her parents.

Right photo: The St. Mary-Immaculate Conception School Alumni Committee honor the outstanding leadership and accomplishments of Sister Suzanne Gallagher by dedicating the new playground and soccer field in her name. Sister strongly believed in the importance of educating the total child, academically, spiritually, morally, socially and physically. The committee also dedicated the new auditorium in honor of Sister Suzanne’s love of the arts and her belief that every child is a gift and every child is gifted. Sister Suzanne has left quite the mark on St. Mary School and those whose lives she touched there.