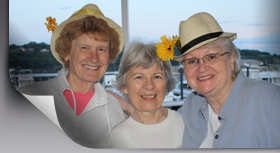 Teaching with a Passion

Some people traverse the globe, but Sister Gina Marie Foletta has made her way from coast to coast – with a few stops along the way!

Born Virginia Evelina Foletta in Modesto, California, to Robert and Evelina Foletta, Sister Gina has one sister who is married with two sons. Gina’s father, Robert, loved “arithmetic,” could even do many problems in his head, and he passed this gene on to his daughter who, consequently, has lived in the math world for a long time. She was fortunate to have teachers in fourth and fifth grades who shared the same passion, and thus had a positive influence on young Virginia.

After finishing high school in Modesto, Virginia went to California State University Stanislaus in Turlock, California, earning her bachelor’s degree in physical sciences. As required by that university, she spent a fifth year obtaining her teaching credential with a specialty in mathematics. Subsequently she taught high school math in Stockton, California, for six years.
In 1971, as Providence designed, she received a National Science Foundation Grant in Mathematics for a program in Missoula, Montana. There she met Sisters Kathleen Dolphin and Kevin Cummings, both Dubuque Presentations, and both there for further education. Common interests like hiking and tennis drew them together, and many good conversations occurred.

The memory of that summer lingered as Virginia returned to teach. She had a particular image of religious, which the two she had met in Missoula didn’t seem to match. The sisters she knew “looked old,” and seemed more distant. These two were fun to be around. Now curious, Virginia asked her new friends if she could visit them in Mason City, Iowa, over the Thanksgiving week. She came into a convent of about 20 sisters, at least 15 of whom were “young.” Now her old image was totally shattered.

But, wisely, Virginia took time to reflect. As is normal, sometimes she wanted to join the Sisters of the Presentation; sometimes she didn’t. The following summer she travelled the Western states, going to places like the Sierras, Yellowstone, the Grand Tetons, all the time reflecting on her life vocation.

During Christmas vacation of 1973, Virginia went back to Mason City to visit to the sisters and at that time they brought her to the Presentation motherhouse in Dubuque, Iowa. As they were winding up the driveway, Virginia thought: “This looks like a college dorm,” which was a pleasant experience because it again shattered her image of what convents must be like. Inside she met more sisters, both young and elderly, and everyone was friendly and hospitable. More shattering.

In August of 1974, Virginia found herself moving into that “dorm,” not only having made her decision, but also having weathered the hard thing of telling her parents. Evelina had always taught her daughters to “Dream big, do things, make your own decisions,” so, as hard as this was, her mother couldn’t object when Virginia followed her advice! Still, she did comment a bit wistfully, “Don’t they have any sisters in California?”

Unfortunately, Robert died in 1976, so Evelina came to spend Christmas at Mount Loretto. Experiencing the same warmth and hospitality that Sister Gina did a few years earlier, Evelina reflected to her daughter, “Now I know why you wanted to come here.”

During her formation years at Mount Loretto, Sister Gina taught two classes in math at Wahlert Catholic High School. But, much as she enjoyed teaching, her great love was her canonical year which provided her the opportunity to further develop her own spirituality and to absorb the “wonder of religious life.”

After her first profession of vows in 1977, Sister Gina moved to Storm Lake, Iowa, to teach high school math, and she added mechanical drawing to her repertoire. Sister Dominic Church had started that class, and Sister Gina loved geometry, so it was a perfect fit. But a new “invention” had arrived – computers! Sister Gina became well acquainted with technology, and she took some of her high school students to use the computer facilities at Buena Vista College. In 1986 she earned a master’s degree in computer science at the University of Oregon.

The biggest “plus” of Storm Lake was that she loved the lake! She thought of Iowa as pretty “land-locked,” so the lake in the south part of the city gave her the opportunity to enjoy nature as she loved to do. And it was, again, a place of reflection and prayer for her. After four years, however, Sister Gina went to Fort Dodge, Iowa, to teach at St. Edmond High School where she taught math and computer programming. Subsequently Sister Gina moved to Cedar Rapids, Iowa, where she taught at Regis High School and, after three years, she began doctoral study at the University of Iowa, where she also had an assistantship.

The next part of her journey took her to the “other” coast, where, for the next 18 years, she taught math and statistics at Northern Kentucky University. Still filled with energy, Sister Gina began to supervise student teachers of math at Pennsylvania State University in August of 2013. “It seems like the perfect way to round off my career, because I love working with student teachers, joining in their “excitement and energy for teaching,” states Sister.

Having also worked with student teachers at the Northern Kentucky University, Sister Gina remarks, “Pennsylvania State University is even better because now my whole focus is on working with the student teachers, and I love that!” She slyly adds, “There are also fewer meetings and no pressure for research!” However, she has done her share of that over the years, writing articles for various math journals, and giving presentations at math conferences, which have also been published in the conference proceedings.

Sister Gina was brought up in a faith-filled family. When she was still in Modesto, she used to go to a center to make a retreat “to develop my own spiritual life. That’s why I loved my canonical year so much, because it put a clear focus on the spiritual life.”

She sees her teaching as a real ministry, the service aspect of being a Christian and a woman religious. And she is grateful for community. “The on-going support of the sisters is sheer gift. Many people juggle a lot and don’t have all that support.” But Sister Gina does her share of juggling, staying active in community through membership in various committees and as a member of the Hennessy Trust Board, all of which involve meeting with Presentation Sisters, associates and employees. Still she keeps in touch with family and friends on the “other” coast, and visits there whenever she can.

Although she loves hiking, snow skiing, all of nature, her greatest love is to ride the hills and vales which a roller coaster provides! “It’s the closest you can get to flying,” chuckles Sister Gina. The next time you see a roller coaster, look up to see the “Flying” Nun! She is, to put it mildly, the most rounded and amazing person you will ever meet!