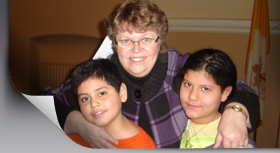 When one walks into Sister Cheryl Demmer’s office, one is greeted with a larger-than-life smile and a warm welcome. And you know that she is there for you, whatever your need might be at the moment. Sister Cheryl is the director of faith formation for Saints Mary and Matthias Parish in Muscatine, Iowa.

She comes by her administration skills both naturally and by education. The oldest of the six children of Charles and Martha Jane Demmer, Sister Cheryl learned early in life how to keep some order among her four brothers and her only sister, now Presentation Sister Donna Demmer. After graduating from St. Joseph School in Farley, Iowa, and obtaining a bachelor’s degree in sociology with a minor in elementary education at Clarke College (now Clarke University), Sister Cheryl later earned a master’s degree in administration and supervision, also from Clarke. She began her ministry as a teacher in primary grades. Her first mission was at Resurrection School in Dubuque. Subsequently Sister taught at Sacred Heart School in Osage, St. Joseph School in Mason City, St. Patrick School in Cedar Falls, all in Iowa; St. Odilia School in St. Paul, Minnesota; and St. Dorothy School in Chicago, Illinois. At St. Dorothy’s, she taught primary for one year, then transferred to fifth grade. When she moved to Humboldt, Iowa, Sister was the school principal, taught eighth grade and was the director of religious education for 10 years.

In 1999 Sister Cheryl moved to Muscatine where she was the principal of the common school for the two merged parishes of Ss. Mary and St. Matthias and the director of religious education from 2000 to 2008. In 2008 she began her ministry as the director of faith formation in Muscatine and in Columbus Junction, a neighboring parish. As in many other parishes, her role also includes attentiveness to Hispanic parishioners, particularly in being sure that all communications are printed in both languages.  Sister Cheryl spent a year studying Spanish, and keeps improving her skill through her visits with the Hispanic people.

As if all of this were not enough to keep Sister Cheryl busy, she has been on the Davenport Diocesan Board of Education for 13 years, four of those years as president of the Board; she is on the Admissions and Evaluating Team for admission to the Diaconate in the diocese, and on a Discernment Team to help people discern vocations. She has been on the Christian Experience Weekend (CEW) team for Davenport the last seven years, and on a Teens Encounter Christ (TEC) team before that. Sister Cheryl also helps the parish in nearby Wilton with their sacramental programs.

None of this goes unnoticed in the area, however. People speak very highly of Sister Cheryl. She comments, “I don’t want to waste a minute when I could be doing for others. It is important to me to be there for the people.” This desire has indeed been recognized by a retreat master who commented that she has a “Shepherdess Heart,” and by Father Jason Crossen, her current pastor, who presented her with 15 white roses on the World Day for Consecrated Religious. It is also highlighted by co-workers who speak of her hard work and her comforting presence to all.

But wait, there is another side to Sister Cheryl. She loves to play the piano, and has frequently played for Masses in various places.  She likes to embroider, play cards, and work puzzles, especially Sudoko. Here is the mystery: When does she find the time for any of this?

Left photo: Sister Cheryl Demmer is surrounded by a group of religious education students who are eager and ready to learn about their faith.