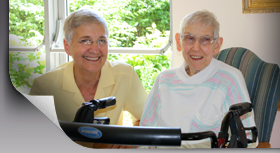 A woman with a variety of interests, Sister Marie Therese Coleman has developed multiple hobbies since retiring to Mount Loretto in the early 1990s. She rekindled an interest in music – particularly violin – instilled in her teenage years by Sister Henrietta Teff. She began vigorous walking and bicycling around Dubuque to visit the sick and to gather parish bulletins for the sisters. She tended to several kittens and two canaries when the animals needed care.

“I love animals, all kinds,” says Sister Marie Therese pointing to a pillow adorned with a kitty in delicate needlepoint, a white fuzzy stuffed bear and other small creatures that share her room.

Add to these long-time interests, Sister Marie Therese is computer-literate and enjoys reading online and using email, Facebook and LinkedIn to keep up with family and friends.

“Mother was a very religious woman,” states Sister Marie Therese. “As a family we were part of parish life. We attended novenas, Lenten Masses and devotions. By the seventh grade I was a member of the Sodality of the Blessed Virgin Mary.”

Sister Marie Therese credits the Presentation Sisters at St. Cecelia as good teachers who inspired her and nurtured her religious vocation. With reverence she remembers each of her grade and high school teachers. She adds, “I had several cousins who were sisters and one a priest.” As those before her, she became a teacher. Sister Marie Therese served at Catholic schools in Clare, Dubuque, Mason City, Storm Lake, Sheldon and Waukon, all in Iowa.

When retiring to Mount Loretto, Sister began her community prayer and service, locking and opening external doors, serving in the sacristy, preparing coffee and fruit for breakfast and distributing the newspapers throughout the house. Those jobs and her weekend treks around Dubuque provided good exercise to this woman on the move.

In recent years, however, Sister Marie Therese has shortened her miles but remains determined to keep going. “In good weather, I go out to the courtyard and walk around to the front entrance. Before my strokes, I used the pool,” she states. “I use my walker to get around the house and try to do one hour a day on the NuStep (recumbent bike).”

When not able to join the community in the chapel, Sister enjoys the closed circuit television channel for Mass and prayers. She also tunes into EWTN for spiritual reflection. At times, she gets a nap in her recliner.

“In a crowd, I can be swallowed up in the middle. Most of my life I have done the unnoticed things. This is how I bring Presentation hospitality to others,” she comments.

Nano Nagle’s story is meaningful to Sister Marie Therese. “I like Nano. She made her way through Cork; I walked around like she did as she made her way in the lanes; I visited the sick and lonely.”

A big smile accompanies Sister Marie Therese’s deep sense of gratitude. “I appreciate the care I get in community,” she remarks. “The sisters and staff are great about checking in on me to see if I need anything.” A visit with Sister Marie Therese means a lot to her and, at the same time, can offer a visitor interesting anecdotes about this most grateful woman religious.