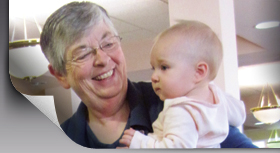 “Oh, good! Sister Rita’s grandchildren are here today!” exclaims one of the sisters.

“Grandchildren?” questions a visitor. “I thought sisters never got married, much less had grandchildren.”

Well, that would be a most reasonable response, because normally that is the case. But Sister Rita Cameron is not a “run-of-the-mill” sister from any perspective.

Rita Julson was born and raised in Aberdeen, South Dakota, middle child of Leslie and Mercedes Julson. Her father farmed and managed grain elevators, so they moved around the area a bit, and thus Rita and her two sisters, Leslie Ann and Sue, attended small schools where they were living.

After high school, Rita attended Northern State University in Aberdeen, earning a bachelor’s of science in music education, and meeting her future husband at a dance. It was fortuitous that both Rita and Bruce Cameron loved to dance, because they married after graduation!

For about 20 years, while Bruce farmed, Rita taught K-12 music in a district near Aberdeen. Meanwhile, she earned her MA in guidance and counseling from Northern State University. Bruce and Rita had two children, JoAnn and Robert. Most unfortunately, Bruce died in 1986, leaving Rita to raise her children alone. Rita taught music in South Dakota until 1994.

In 1994, Rita’s sister, Sue, suggested to Rita that a move might be good for her, and told her there was an opening for a guidance counselor at Newman High School in Mason City, where Sue lived. Rita was ready and accepted that position at Newman, where she remained until 2002.

Since the Presentation Sisters staffed that high school, Rita came to know them well, and frequently visited the convent where she also met the sisters who taught at St. Joseph Grade School. She observed the sustaining prayer life of this community and their great capacity to have fun together. They were also hospitable, so Rita was often invited to do things with them.

Rita began reflecting on all of this, and she questioned herself: “What if I became a sister?” She reasoned that her children were adults “on their way” in life. And indeed they were supportive. Well, with one qualification: Robert, then 21 and in the service overseas, asked, “What on Earth do I tell my friends!?” But JoAnn, with the voice of reason, commented that her mother had spent her life taking care of them, with very little time for herself, so now it was time for her to take care of herself and to do what would make her happy in the rest of her life. The only person who was a little disappointed was her aunt who, as it happened, was a member of the Sisters of the Presentation in Aberdeen. Her disappointment is more than understandable, but it was mitigated by the fact that they were now both daughters of Nano Nagle, and the two communities often shared meetings and other events.

So Rita began the process of formation, entering the Presentation community in Dubuque in 2002. As it happened, there were no other women entering the community that year, so Rita was alone in her formation process. But two Franciscan Sisters became her fast friends when they all attended inter-community formation events. During her formation years, Rita ministered as a guidance counselor at Wahlert High School in Dubuque. After she made her first vows in 2005, she began music ministry at St. Ambrose University in Davenport, Iowa.

Sister Rita made her final vows in 2008 and in 2010 she was invited to begin vocation ministry for the Presentation community, a position she still holds. She has been an active member of the Dubuque Area Vocation Association (DAVA), and has been its facilitator for two years. Sister Rita also volunteers at the Dubuque Food Pantry, working with Lynn Mary Wagner, who is the director of that facility.

Sister Rita is a joy-filled woman with an even spirit for whatever arises in her life. Partly that is because she loves people, interacting with them, learning from them, hearing their stories and appreciating how they got to where they are today. Additionally, she loves woodworking, restoring old furniture to new life and she is very skilled at this hobby. Finally, she loves any kind of music – and dancing! A well-rounded person indeed!

Sister’s life is highlighted by going to see her son’s two children in Mason City, and her daughter’s three children in Michigan. But the sisters like it even better when they come to Mount Loretto!

Never were words more true than are these from Sister Rita, who summarizes her life saying, “I have had the best of both worlds.” And there are two children and five grandchildren, many students, and all the Sisters of the Presentation who concur. All have been blessed by her presence and are thankful she asked that question of herself many years ago: “What if I became a sister?”