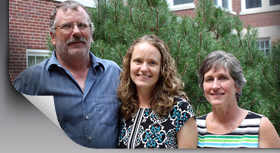 Living Nano Nagle’s mission in Chicago and exploring the shifts in religious life with other young Catholic sisters are guiding lights for Sister Jessi Beck as she continues her first year of life and ministry in Chicago, Illinois.

After graduating from the University of Northern Iowa in 2003, Sister Jessi was a substitute teacher for a semester and then became a volunteer at Amate House in Chicago, where she lived, prayed and did service and justice work with other young adults. Sister entered the Sisters of the Presentation in 2005. After two years of studies in theology and religious life, she began her ministry as a Presentation sister, teaching second and third grades at St. Mary Elementary School in Manchester, Iowa.

“It was a great school community and I found it hard to leave.”

Sister Jessi’s presence at St. Mary’s is remembered fondly: “Sister Jessi was a joy to work with at St. Mary’s,” shares Principal Vicki Palmer. “She saw the good in everyone she met and was a constant inspiration to me and those she worked with. Her commitment to her faith and to reaching out to those in need has inspired me to do for others as well.”

Presently Sister Jessi is teaching second grade at Our Lady of Tepeyac (OLT) Elementary School located in the Little Village neighborhood of Chicago’s southwest side. The current enrollment at OLT is 155 students with an average of 15 students per classroom. Ninety-eight percent are Hispanic and two percent are African-American. Ninety-nine percent are Catholic.

“I felt called to Chicago and Our Lady of Tepeyac so that I could walk more closely in the mission of Nano in serving those most in need,” Sister states. “Ninety percent of our students qualify for free and reduced lunch. Just as many receive some form of scholarship at our school.”

Sister Jessi appreciates the cultural diversity and richness in her Chicago residential neighborhood where she can hear Chinese, Spanish and English spoken at any time. “I have connections to various groups, including my Amate volunteer friends,” she says. “Seven of the eleven from my original group live in Chicago and follow the Amate vision to put love into action.”

At Our Lady of Tepeyac, Sister is spending her first year listening and learning and figuring out how things happen there. “There is a living adjustment in a large city and a cultural adjustment in school,” says Sister Jessi. “The students are eager to learn and yet many live in a bilingual environment with Spanish spoken at home and English spoken at school.”

Several years ago, Sister studied Spanish with Presentation Associate Dora Serna. This gave Sister Jessi an understanding of how difficult learning another language can be.

“I work with clubs during school time. The one I offer is called Green Team,” states Sister Jessi. “Our school had received a grant from the Peggy Notebaert Nature Museum in Chicago for a small outdoor learning area, raised garden boxes, a rain barrel and benches. This year, my Green Club of kindergarten through third grade students bought seeds to grow lettuce, radishes and peas in the raised boxes. This is one way for me to integrate environmental and ecological concepts into my teaching.”

Being in touch with the principal and staff of St. Mary School in Manchester, Sister Jessi networks her Chicago students with the Manchester students. “I am finding I’m in a place of great possibility for making connections,” remarks Sister Jessi. “My second grade students are pen pals with Mrs. Hansel’s second-graders at St. Mary’s. This pen pal relationship has been an excellent way for both groups of students to learn about a group of students in a very different setting. The kids are very excited to make new friends in Iowa. They think a field trip would be awesome!”

This past Advent, the St. Mary school and parish community decided to gather school supplies, games and prayers for the students at Our Lady of Tepeyac.

“This opportunity helped my students, who have so much, to recognize that not all students can have the resources we have,” shares Deb Hansel. “We hope to be able to send a teaching resource for Sister Jessi and the kids later in the year.”

On January 3, before classes resumed in Chicago, Sister Jessi visited St. Mary’s, spoke to the students and received their gifts to take back to her new school. “It was wonderful to visit the students and staff. I am very grateful for their generosity and continued support,” she comments.

Having sister-neighbors is important to Sister Jessi. “The Presentation sisters here in Chicago were part of my discernment and affiliate group before I entered the community. It’s nice to be with them again,” comments Sister Jessi whose students are also doing service with Sister Barbara Rastatter, the director of senior ministries at St. James Parish in Chicago.

Sister Jessi’s sister-neighbors also include young sisters from other communities. Her participation in “Giving Voice,” a peer led organization that creates spaces for younger women religious to give voice to their hopes, dreams and challenges in religious life, is an ongoing experience for Sister Jessi since 2009. At the 2011 summer conference, she gave a reflection on the future of religious life – the blessings and challenges. She will also be part of the planning team for the 2013 conference, “Mission and Ministry in the 21st Century.”

“Giving Voice is the only place where I am surrounded by other young women religious. There are a number of young sisters in Chicago who get together on a regular basis. While we recognize that we are strongly called to our particular congregations, we have community among us,” shares Sister.

Teaching second-graders or participating in a class or vocation event at Chicago Theological Union, gathering with her peers and attending Giving Voice events, meeting with her formation director, catching up with sisters at Mount Loretto or joining her Sacred Circle group in Dubuque inspirit this young woman religious.

In addition Sister Jessi serves on the committee for Presentation Quest, an immersion and service program sponsored by the Dubuque Sisters of the Presentation. She is a Eucharistic minister at Our Lady of Tepeyac parish, gathers monthly with young adults for Taize prayer and updates the Presentation Facebook page. There is no doubt that Sister Jessi Beck keeps her Nano lantern burning brightly.