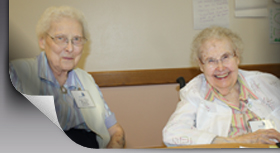 A Woman of Gratitude

Rarely does a writer for Presentation Doorways have her work done for her! But I was just that lucky, because, in fact, Sister Anne Marie Kollasch has written her autobiography, which also includes much family history. Some time ago the Dubuque Presentation Sisters invited Fran Kennedy, a writing teacher and an author herself, to share some writing guidelines and offer suggestions for sisters interested in composition. Sisters were, in turn, invited to write an autobiography. Sister Anne Marie did just that! In addition to personal visits with Sister Anne Marie, her "Kollasch Collage" serves as a resource for this present article.

The daughter of Charles and Anna Kollasch of Whittemore, Iowa, Sister Anne Marie is the oldest of nine children. A testament to the faith life of this family, two daughters and one granddaughter became religious sisters, and one son became a priest.

Taught by the Presentation Sisters in Whittemore, as were her father and mother before her, Sister Anne Marie became a Presentation Sister. Her sister, Joanne, is a member of a Benedictine community, and her niece, Maxine Kollasch, is a sister of the Servants of the Immaculate Heart of Mary (IHM). Her brother, Father Gene, was a Jesuit who ministered in Korea for 33 years. In addition, numerous cousins chose religious life: Fathers Victor Kollasch, Louis Kollasch, Merle Kollasch and Armand Elbert. In the Presentation community alone, Sister Anne Marie names six relatives: Sisters Matilda, Denise, Pierre and Marita Kollasch, Presentation Dahlhauser and René Laubenthal.

After 10 years of "grueling" summer schools (as Sister Anne Marie puts it, because a semester’s course was taught in six weeks), she received her bachelor’s degree from Loras College with a major in history and a minor in English. But she had been teaching long before that was accomplished. She began her ministry at St. Joseph School in Mason City, Iowa, where she taught for 10 years in grades five, six and seven (separately) over that period.

Following Mason City, she taught in various Catholic elementary schools in Iowa – St. Columbkille, Dubuque; St. Joseph, Key West; St. Patrick, Waukon; Immaculate Conception, Charles City, and finally at St. Cecelia in Algona, Iowa, where she was again close to family. During several of the summers Sister Anne Marie did graduate work at Clarke College in Dubuque, and, thus became a federally-certified remedial reading specialist during the last 15 of her 25 years in Algona. Sister regularly visited the care centers during her teaching years and did additional pastoral ministry during her last three years.

During her time in Algona, both of her parents passed away, only eight months apart, and she considered herself blessed to be so close to Whittemore during those times. Sister also treasures the fact that in those years when she was geographically close to her family she could join them for many happy occasions and reunions.

Needless to say, it was with mixed emotions that Sister Anne Marie retired in 1993 and returned to Mount Loretto "where I had been nurtured and prepared for the apostolate from the time I first arrived there in the fall of 1940." Although she greatly missed her family and their gatherings, she states that "the memories of those years have sustained me in my retirement." During her early years of retirement, she regularly visited patients at the Dubuque Nursing and Rehab Center.

"But," she adds, "I take great delight in the beauty and accessibility of our Mount Loretto home. The environment in our dining area and adjacent sunroom is inviting any time of day for refreshments and a chat with friends. And my decorative, homey, comfortable room is a kind of ‘inner sanctum,’ free from intrusion where I find solitude with God and self. And having a television enables me to keep abreast of current events, especially social justice issues. Having majored in history, I’ve always had a liking for it and political science. I am intrigued as I observe the political arena of affairs unfold in the present, as it is history in the making. I have, likewise, had an innate love for theology and literature. I keep relished historical and literary documentaries featured on TV."

"Aside from my interest in history and politics, what really ‘makes my day’ is participation in our liturgical celebration of life at Mount Loretto. As I continue my sojourn into the sunset of life, I am ever aware of the ‘hundredfold’ that is mine as God’s beloved. I find myself repeatedly telling God how grateful I am for His sustaining love at this time in my life. Unable to hurry as in the past, I’m slowing down and taking time to ‘smell the roses,’ as they say."

At 98 years of age and the oldest member of the Dubuque Presentation community, Sister Anne Marie is an example for each of us as she reminds us of the importance of thanking God for the "hundredfold." May we all become ever more sensitive to the goodness of God and the ability to be grateful even in difficult times.