Learn more by clicking on one of the featured associate groups listed below.

Read about how associates are carrying out Nano's legacy by living the Presentation mission and directional statement in their own lives. Click here. 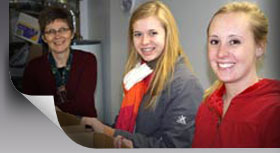 The Chicago Presentation associate group strives to follow in the footsteps of Presentation foundress, Nano Nagle, through their shared conversation, prayer, connections and experiences. Taking advantage of their urban setting, this associate group has endeavored to grow in awareness of area cultures and religions. Associates Pat and Gino Pacetti recall a visit to the National Mexican Museum where they learned about the Day of the Dead celebrated in the Hispanic community each November. “From decorated altars to honor their dead to a huge pile of books reminding us of the thousands of undocumented immigrants who are never able to complete their education, the entire exhibit offered each of us powerful messages for meditation.” 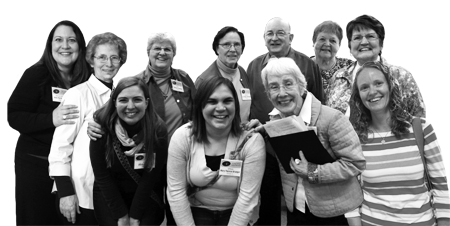 An African-American experience was also enriching as the group spent a delightful afternoon at the DuSable Museum. There they were educated on the early history and contributions of the black community. Associate George Evans shared a recently published book, “Pioneers, Patriots and Planners,” which included his family and the area where he grew up.

Another gathering found this Chicago associate group knocking at the door of the Polish Museum located in “Old Polonia” district, touring two aging and beautiful nearby Polish churches and enjoying a traditional Polish buffet of sausage, dumplings, pancakes, stuffed cabbage and crepes. Very much in their thoughts was Associate Mary Ann Schaefer, a group member of Polish descent, who had died earlier that year.

Unable to attend Dubuque’s “Women in Spirit” exhibit, the group traveled to St. Mary’s in South Bend, Indiana, for the display of the beginnings of women’s communities in the United States. Associate, Sister Virgie Luchsinger recalled the day: “The weather was warm with dry, fall breezes. It matched the euphoria we felt as we owned the struggles and triumphs in education, hospitals and serving that we witnessed through photos, artifacts, and words recorded from these pioneers in America and in the Church. We also learned from Mary Fishman’s “Band of Sisters,” a documentary on a fifty-year history of Catholic nuns in the United States highlighting Sisters’ contributions in ecology, farming, immigration reform and communal contemplation and dialogue.That evening we enjoyed an authentic Italian meal together, researched and planned by Associate Gino Pacetti.”

Transition has been a reality through the years as the group has experienced beloved members’ failing health, deaths and moves to other areas of the country. Associate Betty Spehar reflects that staying connected despite circumstance or distance is a priority for this group. “We remember all of our group members in prayer and love, and continue to include those in ill health by keeping them informed though phone calls and notes.”

During the past year the group has been energized by the call and challenge of the Presentation directional statement and the congregation’s invitation to join an “Emerging Circle” that meets throughout the year to bring to life the work of the Presentation directional statement in various areas of focus. “It’s great to see such enthusiasm for positive change around important justice areas like immigration reform, human trafficking, sustainability and ecology and women and children,” relates Sister Raeleen Sweeney.

Also this year, in keeping with the Presentation charism of hospitality, the group has welcomed in four young women who are interested in becoming Presentation Associates. “Using the associate orientation process, we meet frequently to study and reflect on the Presentation mission and the role of the Associate Partnership. Each of our gatherings draw us together as a faith community and into the Presentation spirit and charism,” reflects Bridget Lahart, prospective associate.

With Nano’s blessing, the group looks forward to another year of enrichment, a welcoming ceremony for their four prospective associates and growth and discovery led by Nano Nagle’s lantern light.