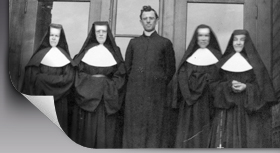 “In 1920 some timid, home-loving sisters considered South Dakota almost beyond Earth’s end. However, four valiant daughters of Nano Nagle were found who were ready to face anything for the honor and glory of God in the name of the Iowa Presentation Sisters. They were Sisters Mary Albia O’Brien, Mary de Sales Weibel, Mary Winifred Donohue and Mary Rita Duffy. Fired with ambition for achievements in the Master’s ripening fields in the land of the Sioux tribe, Sister Mary Albia, as superior, knelt with her companions before the altar in Mount Loretto Chapel and prayed God to bless their efforts at St. Mary’s in Winner.” Annals

Thus began the history of the Presentation presence in Winner, South Dakota. It didn’t take long for the four sisters to succumb to the warm welcome given by Father Charles H. Virnig and his parishioners. Through the years, 39 other sisters followed in the footsteps of Sister Mary Albia and her companions.

One of their students, Alta Dowd, joined the Presentation Sisters and was known as Sister Mary Francis.

The impetus for the building of St. Mary School in Winner came from Bishop John J. Lawler. His letter to Father Virnig, dated March 2, 1918, states, “You may tell the parishioners that I shall insist on a parochial school, and that it is my wish that you begin to take subscriptions and prepare for the building.”

When the sisters arrived in September 1920, they found an unfinished school, and so they began instructions in the church, using the main body of the church and the sacristy. They lived in the rectory while Father Virnig lived elsewhere until the combination school/convent was completed.

With the blessing and dedication of the new building on November 20, the sisters and students were ready to move in on Presentation Day, November 21. The second floor provided space for sleeping quarters for the sisters and 35-40 boarders. Classrooms occupied the first floor, while the lower floor housed the kitchen, dining room and music practice rooms. The boarders came from great distances, and so arrived on Sunday evening to stay until Friday afternoon. Occasionally they stayed over the weekend as well when the weather did not permit their parents to come for them. The sisters had study hall duties and supervision of bed time rituals and morning wake-up calls along with their teaching responsibilities.

St. Mary School provided instruction in all of the basic subject areas, as well as music and a flourishing extracurricular program for grades one through eight. The music program was very large. The annals describe one of Sister Leo’s recitals from which 40 students were missing because of a blizzard, but “from the length of the program you would never know they were missing.”

In 1934 it became necessary for the Presentation Sisters to return to Dubuque, and for three years the Benedictine Sisters from St. Joseph, Minnesota, took over the teaching duties. According to the parish history book published in 1960, adverse conditions, doubtful crops, price conditions, families leaving the parish and lack of funds closed the school in 1938. By 1940, however, conditions had improved to the point where the Presentation Sisters returned, to remain until 1968. By then the population had decreased to an extent where there were too few students to make a full faculty feasible and the doors closed for the last time.

Oral history tapes available in the archives at the Presentation motherhouse provide interesting anecdotes described by the sisters who ministered at Winner. Sister Denise Kollasch recalls that South Dakota is known as the pheasant capital of the United States. As housekeeper she talked of the day when she helped clean and prepare 157 pheasants for the boarders’ dinner. She was in charge of churning butter from the cream obtained from parishioners.

Sister Clement Bird comments that the older boarders helped with the pheasants. Her impression of the locale was “no trees” and “hot all the time.” Traveling to be with other Presentation Sisters for Thanksgiving entailed a 200-mile trip, but it was worth it to get together “so far from Dubuque.”

Parents sacrificed to send their children to St. Mary School, according to Sister Patrick Waldorf, who recalls that families included the sisters in excursions to the Black Hills, and to Timber Lake to visit fellow Presentation Sisters. The parents were very gracious and often expressed their appreciation for what the sisters were doing for their children. The school population usually included six to 10 Native American families whose children were always ready to help, and who sometimes stayed over the weekend when their parents were unable to have them at home.

Sister Patrick recalls teaching Saturday religion classes at other towns, in addition to full-time classroom activities during the week. A TV station near Winner (150 miles being “near”) once had several sisters on a panel during Catholic Schools Week, giving the sisters a chance to talk about their work and the purpose of Catholic schools. “If busy people are happy people, we were the happiest people alive,” according to Sister Patrick.

Any of the sisters who ministered at Winner, South Dakota, expressed fond memories of the welcoming and gracious people who lived there. Many warm friendships were formed which lasted for years after their departure.