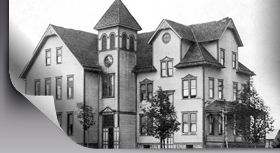 Pastor Edmond Dullard welcomed the sisters to their new home, having worked hard to have everything ready when they arrived. “His every wish was for the sisters’ happiness and comfort.” (Mother Benedict)

A strong supporter of Catholic education, Father Dullard insisted that spirituality and efficiency were the hallmarks of a good teacher. His generosity to the sisters included donating money to decorate the Mount Loretto chapel in 1922.

Upon their arrival, the sisters’ first order of the day was getting settled and preparing for the first day of school. Day students and boarders in grades 1-8 would share the building with the sisters, who lived on the upper floors of the building, until it burned in 1920. After the fire, thanks to good public relations with the local school district, some classes were moved to the nearby public school building, and the rest to the church until a new brick structure was completed.

The new building was named Presentation Academy in honor of the sisters who served there. The name was changed again to St. Michael Grade School when the high school closed in 1959.

While academics were a high priority, other valuable lessons were learned early on according to Sister Dolores Zieser, former pastoral minister at a senior apartment complex in Hopkins, Minnesota. A new resident told a story from her childhood days at Presentation Academy. Sister Mary Augustine Rooney had taught the children that if they were present when anyone died they should whisper the Act of Contrition in the person’s ear. One day, after presenting the girl with an award for winning the spelling bee, Sister Augustine fell dead at her feet. Another student quickly ran to sister and whispered the prayer in her ear.

All was not work in those early days. Sister Constance Quillin, who taught in Whittemore from 1924-1927, tells of after-school activities. “After a full day, the sisters relaxed at a croquet game, or in the evening at six-handed 500 card game, with parties on special occasions. Good selections were played on the Edison and Sister Antoinette Walsh entertained us with her accordion.” (Oral History Tape #43)

Several sisters who served at Whittemore speak fondly of the annual Presentation Day celebration at St. Michael’s. The day began with an all-school Mass, followed by refreshments. Entertainment prepared by the teachers and students was often hilarious, but always ended with a tribute to the sisters. The students then walked solemnly through a receiving line, shaking the hand of each sister and wishing her a “Happy Presentation Day.”

Sister René Laubenthal, principal at the time the school closed in 1993, attributed the closing to diminished enrollment due to larger farms and smaller families. Students transferred to Seton Grade School in Algona or to Sts. Peter and Paul in West Bend, both in Iowa.

Student Cory Mescher shared his memories at the closing ceremony: “All the bazaars and meals and work involved have combined to keep the school going for these 90 years. But most importantly, I have realized in the year’s time that I have been here that there is a tremendous job of parenting being done here. The kids are wholesome and well-balanced – a rarity in our society.”

At the same ceremony, Pastor Father Ed Murray remarked, “St. Michael School has ceased to function in this building, but it will continue to have a presence in its alumni as long as they live. We have truly become the Body of Christ given to the world.”

The school building had served as a center for parish activities such as receptions, celebrations, reunions and funeral dinners. After its demolition, and the sale of the convent, a new parish center was erected – a place where the vigorous parish life at St. Michael’s could continue to flourish into the future.