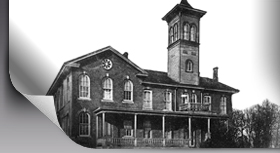 Expanding to West Dubuque
Dubuque foundress, Mother Vincent Hennessy, and the three women who accompanied her from Ireland to Iowa wasted no time in expanding their services beyond their initial school in Key West. Two years after arriving in Dubuque, Mother Vincent’s group of sisters had grown to seven. A few days after the initial profession ceremony of the three young women who came from Ireland, Archbishop Hennessy requested that Mother Vincent send three of her sisters to staff a school in West Dubuque (today it is called St. Anthony’s). The pastor had a small house built, and in September 1876 the first foundation outside of Key West was established.

In the ensuing years, West Dubuque grew in population and became a well-organized parish. The school remained in the hands of Presentation sisters until 1899, when, again at the request of Archbishop Hennessy, the sisters withdrew to make room for the newly-established diocesan community of Holy Ghost sisters.

Nearly a century later, Sister Barbara Rastatter began working at St. Anthony’s as pastoral associate in 1993, until Sister Margaret Anne Kramer replaced her in 2000, the year the parish celebrated its centennial.

Transition to Ackley, Iowa
In January 1877, Mother Vincent received a sudden visit from Archbishop Hennessy and Reverend Peter O’Dowd, pastor of Ackley, requesting that she send sisters to start a school in Ackley, Iowa. The annals read:

“…her dismay was unconcealed at the serious inroad which a second colony of missionaries would make on her small community. Not yet six months since her first little band was sent to West Dubuque! Observing Mother’s distress, the bishop proposed only two be sent, adding, ‘Have them go with Father O’Dowd tomorrow morning.’”

Finding it as hard to leave Key West as they did to leave Ireland, Sisters Mary Josephine Howley and Mary Rose Pius Murphy packed their things and left in the morning.

Sacred Heart Academy opened in 1877, staffed by two Presentation sisters and two lay women. “On the first day, 163 boarders and day students were enrolled. The following fall three more sisters were added to the faculty.

Presentation sisters ministered in Ackley for only one and one-half years before they withdrew to better staff the schools in Key West and West Dubuque, and to open West Hill which would eventually become St. Columbkille School.