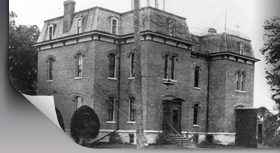 To recount the history of Saint Pat­rick’s School is to also recount the his­tory of the Presentation sisters in Waukon, Iowa, and indeed of Catholic edu­cation in Allamakee County. The five sisters who came in 1883 to serve the Irish immigrants in northeast Iowa were members of an Irish community which had, only nine years earlier, made its first establishment in Iowa.

When the Reverend John Hawe directed the building of a combination convent and school, some practical-minded parishioners had doubts about the viability of a Catholic school. How­ever, the newly-arrived sisters found nearly every Catholic child in Waukon enrolled for the first day of class.

Sisters Mary Presentation Griffin, Alocoque Murray and Ignatius Shee­han conducted the academic program in grades one through eight, while Sister Mary Stanislaus Dillon handled the music and Sister Mary Teresa Downey assumed domestic duties. Over the next 10 years the program and the enrollment grew: all 12 grades were attempted but because the building became too crowded, the pro­gram shrank to 10 grades and re­mained at that size until 1939.

By 1893 more space was needed for the growing population of boarders and day students. A new wing doubled the size of the building and was soon filled to capacity. In 1936 the wing was removed and the original structure was completely remodeled to serve as a convent only. A new building was constructed which would house the grade and high school, parish hall, kit­chen and gymnasium for the next 20 years. The first four-year high school graduating class celebrated its com­mencement in 1941.

More remodeling in 1956 trans­formed the parish hall and kitchen into classrooms and a kitchenette. The church basement was redone to ac­commodate parish gatherings, the school lunch program and, in 1959, one classroom. A second classroom building, opened in 1961, housed kindergarten through grade six. The year 1965 saw the construction of a new convent and the razing of the original building.

Diminishing enrollment caused the closing of the high school in 1970. Today, preschool through grade six share the two classroom buildings with other parish and community groups.

Over the years a warm relationship between the Sisters of the Presentation and the people of Allamakee County has been mutually beneficial. The sisters have given generously and lovingly of their resources, both aca­demically and spiritually, through the operation of the school, the conduct­ing of CCD classes, in parish and liturgical ministry, and most recently, in donating over $2900 from their garage sale proceeds towards Student Tuition Assistance at St. Patrick’s School. They have, in turn, received abundantly.

The last Presentation Sister to serve at St. Patrick’s was Sister Margaret Anne Kramer who served as teacher, principal, director of religious education and pastoral associate during her 15 years at St. Patrick’s. She left Waukon in the spring of 2000.