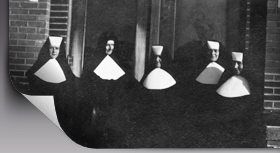 “Spiritually fortified with the peace and confidence that comes from participation in Mass and Holy Communion, five Presentation Sisters faced West, bound for the land of the Dakotas. The date was August 26, 1919.” Mother Benedict Murphy’s Annals, quoted in the Timber Lake Historical Society Newsletter of June 2007

Pioneers Sisters Mary Immaculata Daly, Francis Bannon, de Pazzi Curtin, Baptista Hussey and Loretto Donahue found on their arrival in Timber Lake, South Dakota, that the school building had just been started – the basement was barely visible above the ground. Classes were to be held in the church, and the sisters would occupy spare rooms in the rectory. The pastor, Reverend Henry Kipp, confessed that he was afraid that if he waited until the building was ready, the sisters might by then be assigned elsewhere.

With one teacher in the sacristy, another in the church proper and a third in the gallery, St. Joseph School began with around 100 students in grades 1-8. This situation continued until December when Bishop John Lawler arrived to dedicate the new school/convent.

In 1920, boarding students began to be accepted, and by 1921 a full high school program was in place. After the high school closed in 1936, Sister Mary Callista Ryan was hired by the public school district to continue teaching high school classes in the St. Joseph building for a few years.

The grade school closed in 1940 because of lack of funding, but resumed operation in 1946. A new convent, separate from the school, was dedicated September 15, 1963. The final closing of the school occurred in 1979 due to low enrollment, lack of funds and the need for the sisters to staff other community ministries.

A letter to Mr. Andrew Aberle from Sister Mary Martin McCormick, dated January 25, 1979, expressed the view of many of the sisters, saying, “Timber Lake holds a special place in the memory of any sister who has been fortunate enough to teach there; they have thoroughly indoctrinated the rest of us so that we feel the decision (to leave) as much as if we had been there.”

Memories of sisters who ministered in Timber Lake range from frightening to humorous. The first category includes the blizzard of 1966 when the wind took the convent door, shattering the glass and ripping off the top. For three days the wind increased until it ended in “a screaming crescendo Friday night.” Gusts up to 100 miles per hour packed snow in drifts which reached the eaves, making it impossible to open the door or see out the windows. Letter from sisters dated March, 1966

Sister Mary Georgia Schmeltzer recalled the Depression (1929) as the most difficult experience she ever had. Hundreds of animals died in the drought. There was little food, though the government gave some food and 13 cents per day for the boarders. Cereal was made by pounding wheat between stones for breakfast and supper.

The grasshopper plagues occupied the memory of Sister Mary Inez Doyle. The insects caused massive crop failures. Sister Mary Valeria Durnan described the terror of discovering that the building was on fire, and watching the boarders make their way down the metal fire escape in their bare feet and pajamas.

In spite of the tragedies, many happy memories prevailed in the minds of the sisters who for a short time called Timber Lake their place of ministry. Annals written by one of the early sisters tells of the visit of Bishop Lawler for the dedication of the first school. As the guest of Father Kipp, the Bishop was placed in the “best room” of the rectory, relegating Sisters Baptista and Immaculata to sleep in a small unused room on an unstable cot. They managed to make it through the night until one sister got up in the morning, the cot collapsed, and the other occupant landed on the floor in a tangle of blankets. A good deal of laughter ensued, causing “a serious breach of traditional Presentation strict silence.” Mother Benedict Murphy’s Annals

During the aforementioned fire, a visiting sister lost her teeth in addition to everything else she possessed. Imagine her surprise later when a little girl appeared at the door, teeth in hand, asking who had lost them!

Though the Dubuque Presentation Sisters ended their involvement in Timber Lake in 1981, the work of Sisters Peggy Boehm and Darlene Gutenkauf from Aberdeen continued a Presentation presence in the area from 2003-2008.