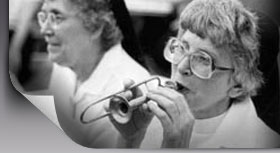 “An invitation for Nano Nagle’s daughters to work in Colorado came like a bolt from the clear blue. The first request came from Father Ghroman at Akron, the other from Father Schmidt at Stratton.” This is how an un-named annalist described the beginning of the eight years of Presentation presence in Stratton, Colorado.

Two sisters were sent to interview the pastors and look over the prospective places. They also met with Bishop J. Henry Tihen in Denver whose words left no doubt in their minds as to the usefulness of their work in Colorado. In his words, “In no place will you find a more whitened harvest than in Colorado. Any sacrifice required of you to come to us should abound in blessings for your congregation.”

Another factor in the decision to go West was the climate which was reputedly favorable for those afflicted with tuberculosis, of which the community had a few at that time. And so August of 1919 found four Presentation Sisters on their way to Stratton to take up the work of evangelization. They joined the efforts of Franciscan Friars who had established parishes in small towns throughout the Diocese of Denver.

Sister Mary Charles Duffy led the little band consisting of Sisters Mary Archangela Duffy, Marie Therese Bergin and Mary Agnes Griffin. They began classes on September 11, 1919, with an enrollment of 90 students in grades one through eight. Father Felix Schmidt had vacated his nine-room rectory for use as a convent and school room for the four upper grades. Grades one through four were taught on the first floor of an attached adobe structure whose second floor served as a sleeping room for the janitor. This arrangement was to last until a new building could be erected.

Some controversy arose over the plan of the new structure. Father Schmidt wanted a building large enough to take in boarders, since he had responsibility for three other parishes and he wanted the children in those places to benefit from the Catholic education which the sisters would provide. St. Charles parishioners, on the other hand, insisted that a smaller building be erected to accommodate only the children of their own parish.

The pastor won out and a two-story building was under construction by the fall of the sisters’ second year in Stratton.  Two years later he resigned, unable to handle the debt incurred from the building. The people deserved credit for their perseverance in struggling with the heavy debt which at the time the new school opened amounted to nearly $50,000. At the time the sisters left, the debt was down to $27,000, with only 70 families in the parish.

In the spring of 1920, three of the sisters became ill with the flu.  Sister Mary Charles did not recover, and the sisters sadly reported to Mount Loretto that she had died on March 21. Sister Mary Loyola Murphy was sent to take her place.

Sister Mary Annunciata Schuster, who arrived in Stratton in 1921 at the age of 18, was interviewed in 1988, a few years before her death in 1995. She thought that the weather in Colorado was ideal – neither too hot nor too cold. She recalled, however, the effect of the sand storms, when the whole building had to be swept before school began in the morning.

When asked if she had any hesitation about going so far away from home, she replied in true Presentation fashion, “I never gave it a thought. I always went where I was told/asked to go.” She described the people of Stratton as “very friendly and very good.”

Eventually the need for more sisters to staff missions closer to home resulted in the return of the sisters to Iowa in 1927.  Enrollment at that time was 136. Sister Mary Rosalia Plamondon in her Annals makes a point of the fact that one consideration in the decision to close Stratton was the fact that the sisters never had the privilege of having the Blessed Sacrament in their convent home.

Priests in the area kept the school going by teaching there from 1927-1929, when the Sisters of the Precious Blood took over the task of educating the children.