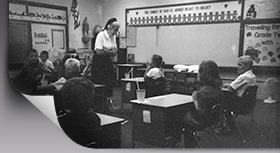 Sheldon, a thriving town in the northwest corner of Iowa, was founded by Irish settlers, who carried their heritage with them to the New World. The first priest to minister to the Catholics in Sheldon was Msgr. Lennihan, who served the church in several counties in the area from 1873-1876. The first Catholic church in Sheldon was built in 1880.

In 1955 Father J. J. Hyland fulfilled his desire for a Catholic school in his parish. Five Sisters of the Presentation arrived in August of 1956 to open St. Patrick School: Sisters Mary Philip Jasper, Therese Marie Hawes, Macrina Donlon, Frederick Pint and Sheila Kane. They found the parishioners to be supportive of their efforts to provide an education which integrated religious truths and values into all subject areas and into all aspects of life.

Over the years, 49 Sisters of the Presentation ministered in St. Patrick School and Parish. The last to serve was Sister Anne McCormick, who gave 19 years to the people of Sheldon, the last 11 years as the lone resident of the convent situated across the street from the school and church.

According to the parish centennial booklet, published in 1973, three young men from the parish had been called to serve as priests, while five young women had entered communities of religious women.

During the 52 years that Sisters of the Presentation were present in the parish, they found that “teaching school” was only part of the range of activities in which they would engage. There were fundraisers, sacramental preparation in neighboring parishes, sports activities, parish events, hospice volunteering, visiting nursing home residents, ecumenical prayer services and the list goes on.

One fundraising activity which has brought much-needed money for necessities is the “Fun and Fund Night” which began in 1971 with a cake sale. The activity, according to Sister Mary Karen Jasper, principal at that time, “helped to draw all of us together.” This annual event has grown to include the sale of hand-made articles, a white elephant auction, refreshments and entertainment provided by the school’s choral group. It remains a vital source of income for the school as well as a social event which parishioners of all ages enjoy.

Other activities which continued to draw parishioners together included a regional golf tournament, attended in 2004 by four Sisters of the Presentation who were avid golfers. (The Globe August 26, 2004) The Nestle Toll House Bake Sale Contest in March of 1997, according to the Sheldon newspaper, produced dozens of cookies and over $4,000 in revenue, along with excitement and camaraderie.

Mission activities have always been a part of the Catholic school experience. One notable example for Sheldon students was their sponsoring the education of a girl in India. Through the generosity of St. Patrick parents and students, she was able to attain a high school education which would have been financially impossible without this help. One student involved in this work said they did it because “she is a part of God’s family.” Another maintained, “It helps Victoria with her life in India and it teaches us kids responsibility and caring.” It is evident that the activity taught many life values along with providing the feeling of satisfaction that comes with helping others.

After a visit to the school in March of 1999, the managing editor of the Sheldon newspaper, Jennifer Dyke, commented on the “Christ-centered atmosphere at St. Patrick, not just because of the symbolism on the walls and doors, but by the examples set by the teachers and followed by the students.”

As part of Catholic Schools Week in 1999, former principals were featured in radio spots on the Sheldon radio station. Sister Karen Jasper (1971-75) cited the Christian community of faith-filled, supportive and generous people she had worked with. Sister Lynn Marie Fangman (1975-77) found people willing to spend long hours for the good of the school. Sister Pamela Quade (1977-81) was impressed with the creativity of the students and the cooperation of parents for the good of the school.

While the last Sister of the Presentation left Sheldon in 2008, this “Christ-centered atmosphere” continues in full force under the direction of dedicated lay faculty and staff.

The tradition lives on.