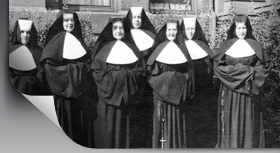 In 1909 Father John M. Molloy had a great deal of influence on the town of Ryan, Iowa, and also on the parish and school in which the Sisters of the Presentation were to serve for 55 years. Legend has it that Father Molloy was pastor at two parishes when he decided that the rectory would be moved from Belmont to Ryan. He faced fierce objections, with one man threatening to “shoot the first person that touched the house to move it.” As the first mover took a step toward the building, a shot rang out, the man collapsed, and within minutes a wagon carrying a “body” raced out of town. All of this later proved to be a hoax, and by the time everyone knew what had happened the building was moved and settled in its new location in Ryan. (Taken from The Witness, 11-27-88)

In 1910 a church was erected in Ryan, and in 1913 Father Molloy oversaw the building of a three-story structure to house a school and convent, which he named after his patron, St. John (later to be re-named St. Patrick to correspond with the name of the parish). Having secured the services of the Presentation sisters from Dubuque, and having made sure that the local families enrolled their children, Father Molloy was involved in the running of the educational program.

The first sisters on the scene were Sisters Mary Francis Bannon, Agnes Griffin, Cornelia Regan, Loretta Donahue and Antoinette Walsh. These pioneers began working with 140 students: 104 in elementary and 36 in high school; most of these were day students and a few were boarders.

The school flourished, with the high school being accredited by the State of Iowa in 1927. According to the Ryan Hi News, March 22, 1946, the variety of activities offered included retreats, orchestra and glee club, sports, drama, the Seraphic Society for Vocations, 4-H and the Bishop’s Relief Collection. The Mantle, the school yearbook of 1945, also lists the Catholic Student Mission Crusade and the Propagation of the Faith as further activities.

The year 1950 saw the construction of a new brick building, which the sisters occupied until 1968 when the doors closed on St. Patrick Elementary School. The high school had closed the year before.

Sister Sharon Kelchen talks about some of the sisters who taught in Ryan when she was a student there. “Sister William Marie Cota (now known as Sister Lou Cota) made a science room out of next to nothing … and had us carving all kinds of creepy things. Sister Virginia Marie Luschinger got us to music contests, and, yes, even surfaced violins from the sisters so we could give it a try, and one day we went to a workshop to play with the orchestra from Columbus (High School) in Waterloo. For a couple of years we also had dance classes on Saturday – where Sister Alberta Lynch got the instructor from, I don’t know.”

The 1960s brought the Vietnam War and the Second Vatican Council. Sister Kathleen Dolphin, then known as Sister Augustine, recalls that in spite of the cultural turmoil around them the sisters and students made the best of the situation. In some ways “we were like a big rowdy family. On more than one occasion a first-grader would wander into the (chemistry/biology) lab looking for his big brother.”

The success of some of St. John/St. Patrick’s prominent graduates attests to the quality of education they received there. Charlie Duggan rose in the ranks of industry to become vice president of the Illinois Central Railroad. Rt. Rev. Msgr. Dorrance Foley ministered as president of Loras College and was chaplain at Mount Loretto for years. Marty Underwood served as “advance man” for Presidents Kennedy and Johnson. Dr. John Eckstein held the position of Dean of Medicine at the University of Iowa Hospitals. (Virginia Sheets, Manchester Press, Dec. 2009)

According to records kept from 1936 to 1968, and Sister Rosalia Plamondon’s Annals, approximately 94 sisters ministered to the students in St. John/St. Patrick School. They saw 13 young women enter the Presentation community, with a number who entered other religious congregations. Sisters Virginette Burke and Rosaria Harrington returned to teach in Ryan for some years. Young men who went on to become priests included Dorrance V. Foley, Clare Drummy, Francis Schroeder and Clarence Drummy.

Sister Irma Ries, a graduate of St. Patrick School, had this to say: “In my memory, there was no clear distinction between the Catholic church, St. Patrick School and the town of Ryan; they were all closely interwoven. The sisters and priests were ever present caring for and caring about the parishioners. They were an extension of our family and integrated into the community.” She describes ball games, church gatherings and community activities in which all of the same people were involved. Sunday morning was a time for prayer and socializing. “The length of time in church and the length of time for gathering after church were about the same. Ryan is still a place where people know, care and are involved in the community and the lives of one another.”

Right photo: Sister Albia O' Brien and her students in 1939.