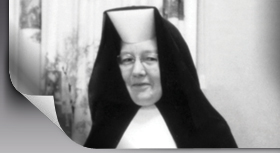 “In the name of the parish … especially on behalf of two generations of Sacred Heart families, we publicly express our gratitude to the Presentation community and to all the individual sisters who have served … at Sacred Heart.” (Father Leon Connolly, parish bulletin, 1985) These comments recognized the 58 Presentation Sisters who ministered in Osage, Iowa, in the catechetical school, Sacred Heart Grade School, and in parish ministry.

Sacred Heart Parish was established in 1878, with the appointment of Reverend James Saunders as the first resident pastor. When the first church, built in 1879, burned in 1928, the result of a chimney fire, Mass was held in the Osage Theater until a new brick structure was completed.

The year 1947 saw the beginnings of a catechetical program under the direction of Presentation Sisters Mary Damian O’Brien, Jeanne Marie Chute and Columba Offerman. The sisters began classes in the convent, the church basement, and the bank building, with music lessons in the convent after school. Students were released from the public school for religion classes two times per week. The sisters taught in Osage, Mitchell, Riceville, St. Ansgar and Orchard for pre-school through high school youth.

According to the Parish Directory published in 1973, “The church expected an arrangement for the building of a convent school to be completed in the spring of 1889.” A school building was eventually completed in 1955 and was used for released time religion classes for two years. Over the years, the parish has seen 15 women enter religious life and six men become priests or religious brothers.

In 1957 Sacred Heart School began operation with a full curriculum of studies for 96 students in grades 1-4; one grade was added each year until 1961 when grade 8 was reached. The first sisters to staff the school were Sisters Mary Dorothy McCormick, Annette Skyles, Roger (Dolores) Moes and Joseph Marie (Marie) Barth. Sister Dorothy applauded the pastor, Father Thomas J. Conroy, for his generous assistance in helping to supply whatever the sisters needed.

The erection of a gymnasium in 1966 came from a recommendation by the State Department of Education that a full physical education program be implemented. Conroy Hall became a center for parish and school activities. In 1967 grades 7-8 were admitted to shared time classes, with the opportunity for students to take typing, home economics and shop at the public school. A learning center was added in 1969.

By 1985, due to the shortage of sisters, the Presentation community withdrew from Sacred Heart School. Classes continued under the direction of a lay principal and staff until the spring of 2012. At that time the local school board made the decision to close, “after concerns of low enrollment and continuing financial woes became apparent …. According to school and parish officials, Sacred Heart School has always been known for its spirit of service and community.” (The Witness, April 15, 2012)

At an all-school reunion in 2002, the most frequent comments from students cited the great lunches, especially the pizza made by Theresa Waters. Others expressed appreciation for the opportunities to help prepare for and participate in school Masses, “always a wonderful experience.” The science fair in Des Moines got several mentions, as did “getting chicken pox from my 1st and 2nd grade teacher!” Music and band experiences were fond memories for many.

Sister Francine Quillin recalled Father Conroy’s concern “that the sisters did what they were supposed to do, because he liked having the younger sisters there … he used to call if we had clothes out on the line and it started raining. And he would make sure we were in by 9:00 p.m. One time a priest was visiting Sister Dorothy, and at 9:00 p.m. Father Conroy called the convent to tell the priest to leave because the sisters were supposed to begin silence at that time!”

Sister Marilou Irons recalled the enjoyable family Halloween parties, especially the family that came dressed as Smurfs, blue hair and all. Several teachers and students alike mentioned roller skating in the new gym before the tile floor went in. When an addition was made to the convent, the workers on the other side of a plastic sheet could be heard making comments which Sisters Dolores Moes and Marie Barth surmised were intended to be heard by the sisters as they ate their supper.

Presentation Sisters returned to Osage in the person of Sister Mary Rosanne Rottinghaus, who served in parish ministry from 1987-2001. She worked with the Renew program, with married couples and with religion classes. Planning for and providing liturgical music and visiting the elderly in their homes meant a full schedule for her. Sister Rosanne says, “I enjoyed the cooperation and spirit of the people in the parish. I am grateful for the friendships made there during those years.” Sister Rosanne retired in 2001, ending Presentation involvement in the parish.