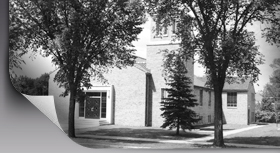 “In the name of the parish … especially on behalf of two generations of Sacred Heart families, we publicly express our gratitude to the Presentation community an

“The Midwest was still new when pioneers in ox-drawn wagons trekked westward in search of a place for a home and the maintenance of their families. Lured by the beauty of its fertile prairie lands, many halted and staked off claims in Minnesota.” Annals #233

As early as 1855, the first Catholics arrived in the Monticello area, and were served by mission priests. The first Mass in Monticello was offered by Bishop Joseph F. Busch of St. Cloud. In June of 1909, St. Henry Parish became a reality, its name chosen to honor Father Henry Blum who had served the parish as a mission from Buffalo, Minnesota.

The year 1937 saw the Franciscan Sisters from Little Falls staffing the school of religion, which they maintained until 1941. Upon their withdrawal, Pastor George Van der Velden made the trip to Dubuque, Iowa, to ask Mother Perpetua Ryan for sisters to take over the religious instruction in the parish. Sisters Mary Denise Kollasch and Callista Ryan, accompanied by Mother Perpetua, made the journey to Monticello to bring the lantern of Nano Nagle to the northland.

Their interview with the pastor and the public school principal revealed that released time for religious instruction was not new to the area. Cooperation between the public school officials and the local pastors had already been established, and continues to the present day. With the arrival of September, the sisters welcomed 141 students. Over the years the population increased until in 1978 over 700 students from five parishes were being served by three sisters and 65 volunteer teachers.

Full-time catechetical work was new to the sisters, who had been educated as Catholic school teachers. With students in grades 1-10 coming during the week from their public school classes, Sunday School classes for four- and five-year olds, Wednesday evening classes for grades 11 and 12, and adult education, the schedule was far from the experience of those accustomed to full days of instruction with the same group of students for a year. Sister Eunice Kane, arriving in 1942, began a systematic training in catechesis for sisters and volunteers alike.

By 1980, the sisters had begun to transition to more parish work, taking their place on the parish council, the liturgy committee and in the ministerial association. Former work with students in classrooms, and private piano and organ lessons, gave way to such positions as parish music minister. The ministry expanded to include the parish in Mound, the neighboring town. Progress is noted at St. Henry with the building of a new church in 1999. The parish Hispanic ministry includes a Mass in Spanish each Sunday.

Today, Sister Carolyn Link resides in Monticello, the 38th Presentation Sister to do so. She is catechumenate coordinator at St. Henry, where she has spent the last 25 years. She serves as pastoral minister/liturgist at Mound. She is recognized in the area as an artist of note, spending her spare time in the study and practice of her chosen field. Her comment in the parish centennial book of 2009 tells of her love for St. Henry: “What first attracted me to St. Henry was the liturgy. It was prayerful, the community was warm and inviting, the music was exceptional. I felt like this could be home.”

The centennial book provides comments about their experience from several other sisters. Sister Eunice observed: “The love shown for the sisters by members of St. Henry Parish was always very evident. A good example would be the sudden appearance of some good steaks … whenever a visiting sister was present.”

Sister Diana Blong remarked, “I remember the warmth and friendliness of the parish and community and the generosity and willingness of people to participate. I will not forget the natural beauty of Minnesota – nature walks and cross-country skiing.”

Sister Irma Ries agreed with Sister Diana. “When I worked as the religious education director, you, the people of St. Henry Parish, grabbed a corner of my heart. I came as a stranger, but you quickly invited me into your family and friendship circles.”

From brave pioneer families to settled and rooted citizens, the people of St. Henry maintain their spirit and their love for God and family.