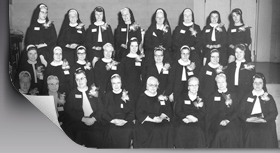 “I found a deep faith in the people in Monona, Iowa, and continue to treasure the memories of my days there,” Sister Sheila Ann Dougherty remarks recently. The roots of that faith grew deep in the lives of the people, nourished by Mass celebrated in private homes before a church building was erected.

Father Louis de Cailly, a missionary priest and nephew of Bishop Matthias Loras, began the formal organization of the parish. After his arrival in 1856, the first church building became a reality. Mary Humphrey, in whose home Mass had often been celebrated, was selected to have the church named St. Mary Church in her honor. She, however requested that it be named for the patron of her deceased husband, and so the church was called St. Richard.

At a cost of $850, this structure provided space for communal worship until 1871 when more room was needed. Father Charles Toner, the first resident pastor, oversaw the completion of this second church building.

“It was late August 1915, when Mother Columba O’Callaghan blessed her second band of outgoing missionaries. Another group of five whispered their trust and confidence at the foot of God’s altar before faring forth to their new field of action in Monona. Catholics of Monona offered the first Presentation sisters a welcome stamped with the generosity ever characteristic of the fine people there. As for the residents of a different faith, they greeted the Presentation sisters with cordial friendliness, a feeling which still prevails.” (Unnamed annalist)

Thus the Presentation Sisters began their ministry in Monona in 1915, living and teaching in the school building completed by Father Michael Hogan in that year. Years later when more room was needed because of increased enrollment, a house a block away from the school was purchased for use as a convent. Though there is no record of why or when a name change had been made, the parish and school was then called St. Patrick.

Over the 54 years of Presentation presence in Monona, approximately 60 sisters served the school. The first of these were Sisters Mary Isadore Leonard, Edmunda Carey, Xavier Evens, Baptista Hussey and Helena Gilrain. When they arrived, they began the business of opening the doors to children in grades 1-8, which further generations of sisters maintained until Sisters Mary Anita Boland, de Pazzi Cassidy, Margaret Donnelly and Therese Marie Hawes closed the doors on May 29, 1969.

Early in the history of the Monona school, two years of high school classes were offered, along with the eight grades of elementary classes. Instrumental and vocal music attracted large numbers of students. Sister Mary Genevieve Burke, with an advanced degree from Bush Conservatory in Chicago, is credited with the training of many who later found success in the music field.

Oral history tapes in the archives contain memories of Sister Joanne Feeney, who recalled a fire in the middle of the night. Awakened by smoke, Sister Thomas Collins found her way to the source – the refrigerator in the kitchen was pouring out black smoke. Sister’s quick action resulted in saving the house from burning down.

Sister Carla Popes recently recalled her memories of living in Monona from 1967-1968. Among her favorite stories is one of Sister Anita Boland’s passion for playing cards. Business meetings were short and to the point, “so we could get to playing cards.” Sister Carla made a big hit with a local farmer when she admired his Angus cattle, so like the animals her father had raised. He asked her which member of his Black Angus herd looked the best to her. They were both shocked when the one she picked was named Grand Champion Black Angus at the county fair.

Sister Emilie Bormann recalls that the sisters probably startled the local residents when they trekked out of town to the river, carrying their fishing poles and picnic lunch, along with a bat and ball. Roller skating in the gym and cruising down the Mississippi River in Father William Menster’s boat were other favorite activities.

Without a car, the acquiring of groceries was a challenge. These were ordered by phone on Saturday from a man in the neighboring town of Froehlich, and delivered on Sunday when he came for Mass. The order always included a half-gallon of ice cream in addition to the staples they had asked for.

An October 25, 2006 article in The Outlook, a local newspaper, stated that, “In the past 150 years, 28 men and women with roots in St. Richard/St. Patrick Church have responded to the call to serve the Lord. Of these, nine were ordained to the priesthood. Three native sons from St. Patrick Parish have been ordained as permanent deacons. Twelve women and two men from the parish have served the church as vowed religious.” The faith of the early settlers continues strong in the 21st century.

Left photo: Monona community honors sisters with a reunion in 1969.