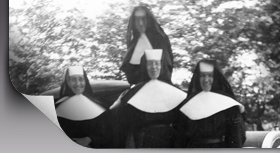 Catholic education began in the “River City” area in 1888 with the building of St. Francis Academy, a boarding school for girls and a day school for boys and girls. The Academy was staffed by the Sisters of St. Francis from Clinton, Iowa. When this first structure burned in 1908, the sisters returned to Clinton. By the time a new building was erected in 1910, they were not available to return to Mason City.

When a request came from Father Michael Carolan for Presentation Sisters to take over the educational duties in Mason City, the small number of sisters available prompted Mother Benedict’s reply, “We are sorry to disappoint you, Father, but to supply you with teachers is an impossibility at this time.” However, at the advice and urging of chaplain Father Patrick Leahy, two sisters from among the General Council, with two others taken from their duties at the motherhouse, were assigned to take on this task.

Mothers de Pazzi Curtin and Columba O’Callaghan, along with Sisters Mary Baptista Hussey and Leo Roach, made the trek west to Mason City in 1910, thus establishing the Presentation presence in the school which was to last 102 years.

The opening of the school for grades 1-8 saw a larger-than-expected enrollment, which required the hiring of a lay teacher to take over the middle grades. Between 1912 and 1916, grades 9-12 were added, with the first class graduating in 1916. By 1920, increasing enrollment prompted the building of additional classroom space and a renovation was in order. In the process of updating, the school was supplied with equipment in accordance with state requirements, and inspectors from the State of Iowa placed St. Joseph’s on the list of accredited high schools.

The year 1927 saw yet a further significant increase in enrollment and another expansion of facilities. A spacious assembly and a gymnasium graced the new structure, providing for indoor athletics. As enrollment continued to rise, the sisters’ quarters were converted to classrooms, and the parish purchased what was originally the Duffield family home to be used as a convent. This structure was dubbed “The Mansion,” and housed the sisters from 1949-1965 when it was sold and given to the city. Now known as the Charles H. MacNider Museum, it stands as an important arts center today. A final move found the sisters in a new convent located behind the church. The spacious new living arrangement featured a chapel with windows designed by Presentation Sister Josita Zieser.

The educational system continued to evolve, with the addition of the construction of Newman Catholic High School in 1961, the consolidation with Holy Family Parish to become Central Catholic Grade School in 1973, a day care center in 1986, and the eventual move of the whole system to the Newman campus in 2003.

Along with its distinction as an NCEA School of Excellence, the Mason City school system also became a Catholic education family tradition for many. Sister Joellen Price and her mother, Irene, both graduated from St. Joseph School, and even had some of the same teachers. At the closing of the St. Joseph building, Sister Bonita Determan, who made her First Communion there, recalled that her father’s youngest sister boarded with the sisters in the earlier years.

Records kept between 1936 and 1990 list 144 Presentation Sisters who ministered in Mason City, with Sister Joan Brincks being the last sister to teach in the school system. Presentation presence in the school ended in 2012. The parish history counts 30 sisters, nine priests, and two religious brothers among its former members. Who can say how many lives have been impacted by those who could trace their roots to this Catholic foundation in “River City?”